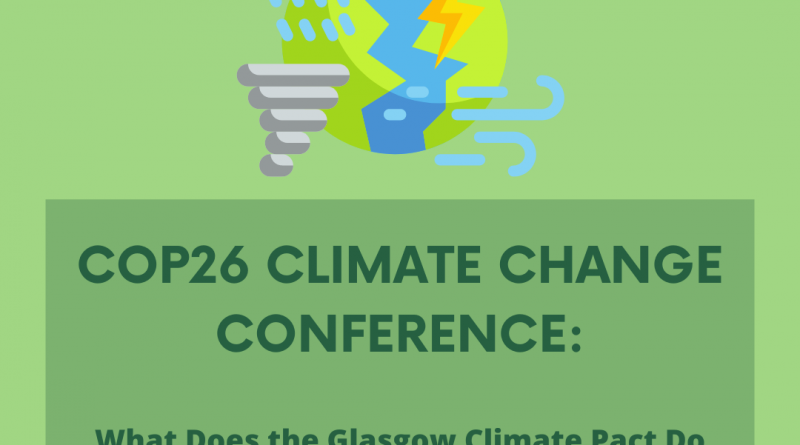 The United Nations Climate Change Conference (COP26) took place in Glasgow between October 31st and November 13th, 2021. It was the first Conference of Parties (“COP”) since the signing of the Paris Agreement in 2015 that demanded attending countries revaluate and make substantive changes to combat climate change. The term “COP” is a catch-all term representing a governing or decision-making body that presides over international conventions or treaties. COP26 was expected to renew and enhance the international commitment towards fighting and mitigating climate change.

COP26 had four main goals it wanted to achieve and included in the climate pact as outlined by the United Nations Climate Change Conference (COP26, 2021a). The first was to “secure global net-zero by mid-century and keep 1.5 degrees within reach.” 1.5°C is the threshold for the global increase in temperature laid out in the Paris Agreement, and any increase above could lead to serious changes in climate, wildlife, and ecosystems. To arrive at the target, counties will have to cut their emissions by half before 2050. The United Nations (UN) and COP26 presented four objectives countries can follow:

The second goal of the conference was to “adapt to protect communities and natural habitats.” This goal acknowledges that the climate has, and is already, changing and hopes to restore and defend against further climate change; this can come from restoring ecosystems that have already been destroyed or building defences, warning systems, and infrastructure that is resilient to climate change.

The third goal was to mobilize finances. The UN and COP26 call on developed countries to raise their promised $100 billion in “climate finances” to help developing countries combat climate change. Additionally, the goal outlines the need for financial and broad support from both the public and private sectors. Companies are also being called to be more transparent regarding potential environmental risks in new developments. In addition to companies, central banks and other financial institutions are being asked to perform climate “stress-tests” to ensure that current financial systems and investments can withstand future climate issues.

The fourth goal of the conference was global cooperation and “working together to deliver.” The final goal allows for the other three to be possible and effective. Unlike other treaties or pacts facilitated by the UN, COP26 requires unanimous consent from all 197 countries in attendance, meaning there will have to be compromises and concessions for the deal to go through. This is often criticized as being unproductive and not beneficial as a country (or groups of countries) can place conditions on their participation. It is a double-edged sword, as for real change to happen, international commitment and cooperation are required.

Although not legally binding, Glasgow Climate Pact will set out the framework and agenda for countries to follow regarding climate change. There were four main achievements of the conference. (COP26, 2021b). The first is mitigation. One hundred fifty-three countries have updated their emissions targets, accounting for about 80% of the world’s greenhouse gas emissions. The UN projects greenhouse gas emissions will be about 5 billion tonnes lower by 2030. This will be done through “phasing down” coal power, stopping and reversing the effects of deforestation, speeding up the switch to electric vehicles, and reducing methane emissions. Of the countries in attendance, 65 have committed to phasing out coal power. Additionally, all participating countries agreed to meet in 2022 to update further and strengthen emission targets. In the pact, 137 countries promised to end deforestation by 2030, accounting for about 91% of all forests on earth.

The second set of achievements came in the form of “adaptation, loss, and damage.” Eighty countries are now a part of either the Adaptation Communications or National Adaptation Plans, which set out to offset the cost of future infrastructural requirements needed to adapt to changing climates. Additionally, a coalition of 40 countries has set out to research and develop solutions to handle the impacts of climate change. Almost a billion dollars has been committed from a variety of developed countries to be put towards funding the cost of future “adaptations, losses and damages,” with over $350 million being committed to the United Nations Framework Convention on Climate Change Adaptation Fund and over $600 million being pledged to the Least Developed Countries Fund.

The third set of achievements falls under finances, with the UK (the host of the conference) setting up a fund with the commitment from developed countries to raise $100 billion a year to offset the costs of climate change. With increased commitment from the largest economies, the UN foresees the possibility of $500 billion being mobilized between 2021-2025. In addition to 35 countries, five public banks and financial institutions have pledged to end new support and funding for international fossil fuel extraction projects, freeing up an estimated $24 billion a year that can be further invested in clean and renewable energy projects. Other commitments outside COP26 have been made, with the G20 countries also agreeing on the $100 billion a year commitment. Additionally, the International Monetary Fund has also committed $650 billion in Special Drawing Rights to increase fiscal space, or room in a government’s budget, to account for climate change initiatives. Outside of governments, a private sector commitment must be made to not “greenwash” activities made by companies. There is also a call for transparency and disclosure standards, with 36 countries requiring companies to provide investors with accurate and up-to-date information about possible climate risks that their project could cause. This is done with the hopes of investors choosing more environmentally friendly projects over ones detrimental to the environment.

The fourth achievement outlined is collaboration. Forty countries endorsed the Breakthrough Agenda, a commitment to make environmentally clean and sustainable solutions the most affordable, accessible, and attractive options in high emitting sectors. This agenda is the most prevalent in the electricity/power, transportation, and steel industries. Other commitments have been made in the agriculture, transportation, trade, automotive, and forestry sectors.

Any time governments meet to discuss the future there is always a sense of skepticism; this is especially prevalent when it comes to meetings centred around the environment and climate change. At a rally protesting COP26, climate activist Greta Thunberg said, “the COP has turned into a PR event, where leaders are giving beautiful speeches and announcing fancy commitments and targets, while behind the curtains governments of the Global North countries are still refusing to take any drastic climate action.” The United Nations Climate Change Conference and COP are often criticized for lacking commitment and accountability. Since these pacts and agreements are not bound by law, they can be used and followed at the discretion of the countries taking part. Additionally, since these pacts must be made through unanimous consent, it is not uncommon for smaller nations to complain about being bullied into decisions by larger nations. Large concessions must also be made to get the agreement signed. This was seen in COP26 and the insistence from China and India to use the words “phasing down” instead of “phasing out” when it came to coal-powered electricity.

COP26 was also sighted as being the most “most exclusionary climate summit ever,” despite the attempts from the UK government to make it the most inclusive. It was estimated that only one-third of the usual number of participants representing the Global South were present, and many civil society groups were locked out of negotiating rooms (Meredith, 2021b). COP26 was also cited as inaccessible to people with disabilities, with a lack of sign language interpretation and wheelchair access.