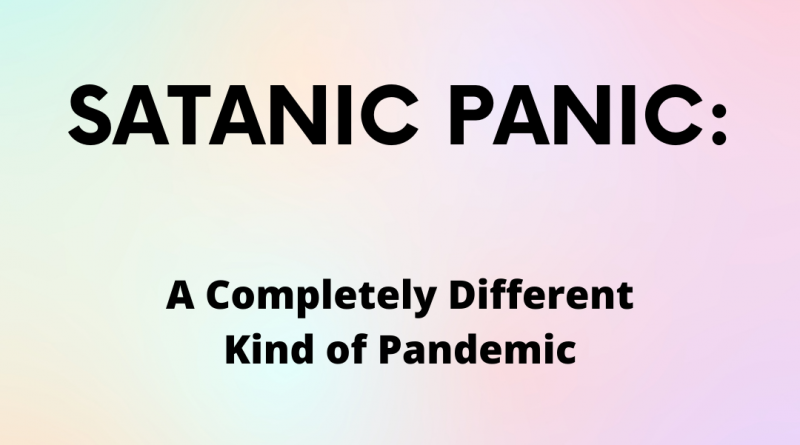 This article was written by Sorcha Deheer

Spanning the year between 1989 and 1990, three teen suicide deaths sparked public outrage, unlike anything the City of Lethbridge had ever seen. Now remembered by few and talked about by even less, the deaths were thought to be connected to Satanic cult activity. These beliefs were ascertained after ‘satanic paraphernalia’ was allegedly found by the uncle of one of the deceased. The items included posters, a plastic devil head, a noose, and a model skeleton. The three wore black clothes, black hair and “satanic jewelry.” News articles identified that they sometimes played with Ouija boards and loved Dungeons and Dragons. The boys were also described as having listened to heavy metal music such as Metallica, AC/DC, Black Sabbath, Judas Priest and The Cult. An Interim news article from 1991 described these same bands as “the music of darkness.” Parents, religious leaders, academics, and law enforcement began to come up with fictional interpretations of the music and its intent:

“There can be no misconstruing the intent of the groups such as Megadeth, Venom, Slayer or Sacrifice. To see the significance of others, however, one must delve into the name: S.O.D. are The Stormtroopers of Death; AC/DC stands for Anti Christ/Devil’s Child, and the members of KISS are Knights in Satan’s Service” (The Interim).

The tragedy in Lethbridge made national headlines for a short period, which was quite the feat for a city of 60,000 people in southern Alberta. Public meetings were held in churches, so-called experts were brought in, and a march to the police station was carried out by angry parents. Many wanted the deaths to be investigated as murders after cult suspicions were raised, but police investigators never heeded their calls.

One teen famously told officials that the problem would “get worse before it got better.” A handful of teens were sent to psychiatric hospitals after their names were found on a suicide list. Parents feared that the problem would spread, however, a psychologist with Alberta Mental Health narrowed the core list to 12 total individuals. In the coming year, two more teen suicides occurred but were eventually believed to have nothing to do with the three boys. Not all voices in the crowd were fanatical. Articles related the suicides to a mental health epidemic among teens rather than a spiritual one.

Reports from the time sound like a B-rate movie, but the events themselves were often serious and dangerous issues. The rise of heavy metal bands in North American middle-class, white homes sparked an international debate. Similarly, DND and many children’s cartoons were seen as anti-Christian because they depicted magic. Stories about witches also abounded on television, including The Craft, Sabrina the Teenage Witch, and Charmed. The deaths came as part of a wider epidemic of satanic cult-related activity in the 1980s and 1990s, but the underlying issue is likely more sinister. Mental health was often ignored or whispered in hushed, embarrassed tones. After 1960 Canada began a process of deinstitutionalization by finding alternatives to psychiatric institutions, but this was not paralleled by adequate social or public support.

The widespread worry over Satanic worship and cult activities at this time earned the colloquial name of “Satanic Panic,” which was stoked by the media. It raised fearful suspicions about anyone taking part in alternative fashion and lifestyles, most notable goths. This kind of outrage and fear can still be seen whenever artists push social boundaries. NWA and Eminem gained this kind of attention in the 90s, but more recently, Lil Nas X has been accused of seducing teenagers into worshiping Satan. Memorably, Eminem addressed this phenomenon in his 2002 song “Sing for the Moment.” The song touches on the rise in average, white American teenagers taking rap and metal songs too seriously; relating themselves to experiences and hardships they didn’t know anything about. Some teenagers likely took songs by Judas Priest or Iron Maiden a little too seriously. They would have found cult activity an attractive answer to severe depression and other mental health problems that weren’t being adequately addressed.

Documentaries and tv shows focussed on ridding satanism from society through fearmongering abounded. Some of these included Hells Bells, a 1989 documentary that advocated for the dangers of rock and roll. Though continually debunked throughout the 90s, memoirs started to spring up telling wild tales of satanic ritual abuse at the hands of secret cults. These memoirs, most notably Michelle Remembers, spurred on a wider fear of satanic sexual abuse in daycares. The book, written by Canadian psychiatrist Lawrence Pazder didn’t just scare gullible readers. Daycares were shut down and their owners were sometimes imprisoned for decades under the false suspicion that they exposed children under their care to satanism. The memoir was taken as fact, and its writer was believed to be an expert in all things cult-related. The most well-known of these cases was that of Texas couple Fran and Dan Keller, who were only released in 2017. The accusations harkened back to those espoused in early-modern England (approximately 1500-1800 AD) during the witch trials. Children were stolen and cannibalized, followers bathed in the blood of innocents, and people were being recruited to participate in secret, sex-filled sabbats.

On the other end of the spectrum, Christian fundamentalism was rising as well. Preachers such as Jerry Falwell established mega-churches and televangelism. They preached a fire and brimstone doomsday perspective that aired nationwide in America. They raised Red Scare-like fears, but instead of communists hiding in plain sight, it was the Satanists. But what made the three decades between 1970 and 2000 so rife with fundamentalism either Christian or Satanic? Some theories point to the fear surrounding Y2K (the year 2000). Others point to massive cultural and social shifts. Popular media was changing, the music got heavier and darker, television was more widely available, and information could spread rather quickly. Like any mass hysteria, there has to be an end. By the late 90s, Satanic Panic has mostly fallen out of fashion. The social constructivist perspective argues that changes in legal frameworks, a decrease in Christian fundamentalism, and the maturing of scholarly fields such as psychiatry and psychology ultimately led to the decline.

Social constructivism is a theory used largely in sociology that argues that people develop knowledge and assumptions based on social factors and perceived reality. The things that we generally take for granted in society, such as race, gender, money, etc., are socially constructed and, therefore, not necessarily a reflection of reality. For example, the idea that pink is for girls and blue is for boys is a social construct based solely on the fact that we all agree that it’s true. The widespread fears of satanic cults have been contributed to the following intersecting factors, according to social constructionist theory:

·        The establishment of the Church of Satan, an anti-religious religious group that was immediately and widely misunderstood.

·        The rise in Christian ideologies understood Satan as a very real entity on earth, rather than a metaphorical one.

·        The growth of a child-saver mentality that became more aware of child abuse and sexual abuse.

o   Social welfare programs were developing throughout this period, as they had done throughout the 20th century. Sexual abuse towards children was starting to become widely acknowledged.

·        The development and popularity of repressed memory techniques led to the development of false memories and accusations (usually related to childhood sexual abuse).

·        Popularity among developing professions such as social work, law enforcement, and psychology.

·        The spread of fear by Christian missionaries.

·        Panic over the moral health of young people, who have begun to move away from traditional Christian values.

Interest in alternative faiths, be they related to satanism or not, had increased during this time due in part to the period having the largest percentage of young people available. As birth rates dropped, so did the number of people interested. Today, North American people are far more interested in the dangers associated with terrorism (as a result of 9/11) and government control (Covid-19). Both events caused a wave of unsubstantiated and overzealous fear that has sparked hate crimes, court cases, and more. Satanic Panic now seems like just one form of the same fear that constantly gripped western society.