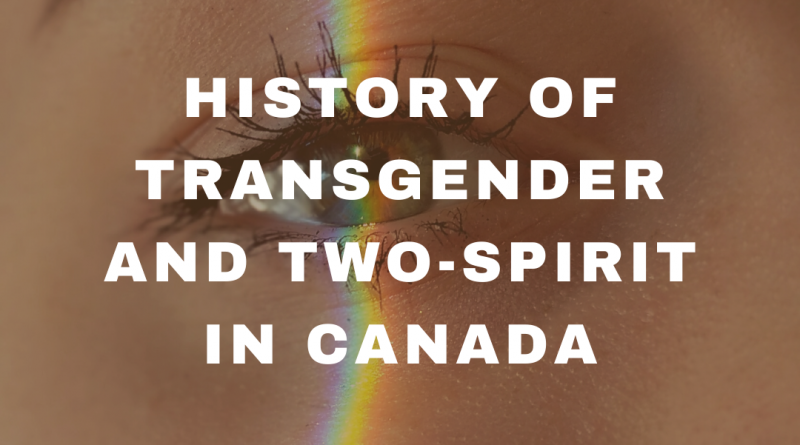 When discussing LGBTQSIA2+ histories, we must keep in mind the various terminology used to describe the community. I must begin by saying I intend to use language such as “queer”, “transvestism”, and “homosexual” to discuss the histories and stories of the LGBTQSIA2+ community. It is also important to note that “LGBTQSIA2+” is a new term and can only be loosely applied to the discussion of the past, but I do not intend to discredit any queer individual of the past, nor do I intend to offend anyone. With this stated, I will begin the discussion of the histories of transgender and 2-spirit individuals. Some triggering topics will be discussed in this article, such as violence, rape, murder, and sexual assault.

Queer history is filled with strife and struggles that are horrifically violent and oppressive. Canada is no different from the imperialist attitudes of Britain during the age of colonization. Dating from the early colonial era, homosexuality was officially illegal, and the penalty for the act known as sodomy was punishable by death. However, before the colonial rule, Indigenous tribes of Canada recognized three to five genders, which included, but was not limited to, men, women, two-spirited men, two-spirited women, and transgender people.The words used to describe these individuals were as diverse as the languages spoken across the continent. Even today, Two-Spirit people play an integral role in Indigenous culture, as well-renowned healers, teachers, and visionaries. Colonization decimated the histories of Indigenous people across Canada and the implementation of Residential Schools from the 1880’s all the way until 1996, when the last one officially closed its doors; unfortunately, the colonization tactics implemented a homophobic and transphobic ideology within the Indigenous community today.

The term “Two-Spirit” originates from the Winnipeg 1990 third annual intertribal Native American/First Nations gay and lesbian conference. It comes from the Ojibwa words niizh manitoag (two-spirits). It was originally chosen to distance Native/First Nations people from non-Natives as well as from the words “berdache” and “gay.” There is an attempt now to reconnect with queer histories in the Indigenous communities, however, it is still considerably difficult in the white-male cisgendered dominated society that continuously advocates for the heteronormative tradition. Cisgendered means that an individual identifies with their assigned gender from birth that aligns with their sex.

The transgender community in Canada’s history faced hardships and was forced into hiding during the pre-colonial era, into the 20th century. An example is John Herbert, a part-time drag queen and eventual playwright, who was arrested in Toronto in 1947 for being dressed as a woman in public and was sentenced to four months in a reformatory. He was later arrested several more times, and his experiences of abuse in prison served as inspiration for some of the plays he wrote later in life. Although he does not identify as transgender, he is an example of the gender-nonconforming community in the LGBTQSIA2+. On February 5, 1981, the Toronto Police Service raided four bathhouses. Dubbed as the Operation Soap, it saw the arrest of 286 individuals. It prompted 3,000 people to take the streets to protest what was deemed as yet another assault against transgender rights in Canada. The struggle for equal rights and eradicating transphobia is a constant hardship that the transgender, gender-nonconforming, non-binary, and two-spirit community faces today. Much of the heinous acts predate the 21st century, but this does not mean that it suddenly disappeared. Unfortunately, because of its mass acceptance and legalization, it has forced the bigots into silence, and silence can breed hatred, as we have seen with the mass shooting of Pulse. Pulse being a gay nightclub in Orlando, Florida, experienced a mass shooting in 2016 because of bigotry that had stewed in silence and ignorance. Despite it being in America, it had repercussions on the LGBTQSIA2+ community, one of despair, fear, and deep sadness.

Education and open-mindedness is the best form of ending violence and hate. Engaging in workshops and learning of past mistakes can make for a better future for all. According to the 2018 Survey of Safety in Public and Private Spaces (SSPPS), an estimated 1 million people in

Canada are sexual minorities—that is, they reported their sexual orientation as gay, lesbian, bisexual or a sexual orientation that is not heterosexual—representing 4% of the population of Canada 15 years of age and older. In addition, approximately 75,000 people, or 0.24% of the population of Canada aged 15 and older, indicated on the SSPPS that their assigned sex at birth was different from their current gender or that they were neither male nor female—in other words, that they are transgender. The work to reconcile and be better is just beginning in Canada, and creating a safe environment for the LGBTQSIA2+ is the first step to reconciliation.

The histories of the transgender and two-spirit communities are full of hardship, assimilation, murder, intolerance, bigotry, and racism. The histories that we create now will be of the utmost importance, how and why it is important to change and do better for everyone. Moving forward, more and more queer people feel safe or capable of coming out and being proud of themselves. Canada has a long history of bigotry and racism that it attempts to cover up or it is simply not discussed as if it never happened, but this is not the path of reconciliation or acceptance. It is time to bring forward queer histories so that the present may learn from the past to do better for the future.