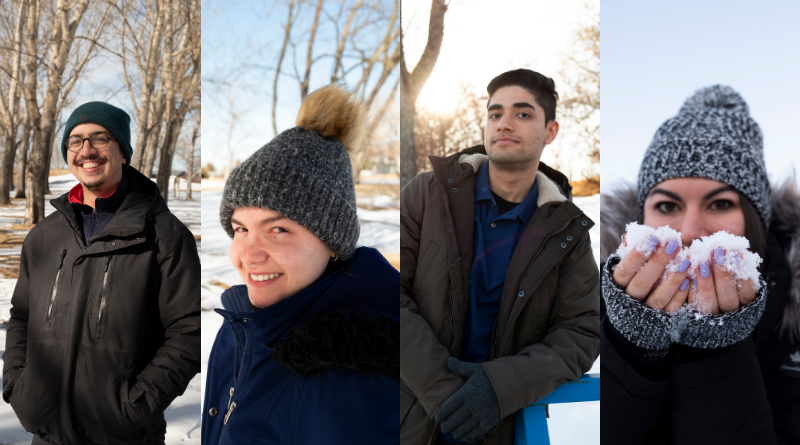 At the start of the Fall 2020 semester, over 10 percent of the University of Lethbridge’s 8702 students were international students. These students come from all over the world and make Lethbridge their home. For many of these students, their time at the university is the first time experiencing the wonders and woes of winter. We spoke to four international students to find out what it was like to deal with the winter for the first time.

PhD student Felipe Cunha did not know much about Canada before moving here. He moved to Lethbridge to work in Dr. Andrew Iwaniuk’s lab, the main reference point in his field of Evolutionary Neuroscience.

“I hadn’t heard about Lethbridge but I did know about this lab […] we study mostly bird brains and how they change according to different behaviours,” he said.

During a band rehearsal before his move, Felipe decided to check how cold it was in his soon-to-be home.

“I saw -19℃ and I told the people in the band and everyone was like oh you’re crazy! I was really afraid of the weather.”

A May move gave Felipe a soft landing weather-wise but as soon as September rolled around he was searching for a jacket.

“I went to the store and told the people working there I’m from Brazil and I’m not used to winter at all so can you give me the warmest jacket that is not that expensive […] I was overthinking a lot, right now I know I was overthinking.”

“I remember the first forecast of a snowstorm I was so excited! My housemate said you’re gonna love it and three days after you’re gonna hate it. And she was so right.“

‘I wanted to shovel [snow] and I was so excited.  After a month I was like I’m not shovelling anymore.”

Lethbridge’s car-centred urban planning was also a shock to Felipe who was used to the dense, walkable living in his hometown of Rio de Janeiro.

“Back in Brazil, it’s all mixed; buildings, houses, a bakery in the corner. You can do everything walking […]  [here] the city is organized with neighbourhoods just with residential houses and then you have these commercial complexes where you find businesses.”

When Sharanpreet Singh Mann decided to study Kinesiology at a university in Canada, the University of Lethbridge was one of the schools on his radar. Since an old friend of his lived just two hours away in Calgary he was sure it would be a good fit for him.

He arrived in December 2019 in anticipation of the Spring 2020 semester. While he knew he’d be experiencing weather much different from what he was used to in New Delhi, Sharanpreet’s first experience of winter was defined by the season’s festivities.

“The first month was pretty exciting. I was there in Calgary with my friend and it was Christmas time […] We don’t celebrate Christmas that much, here it’s all about Christmas!”

Although the holidays were different from anything he’d experienced before, Sharanpreet found similarities in the presence big celebrations have in a society’s collective psyche. Diwali, a five-day-long festival of lights on the surface may seem very different from Christmas but they occupy the same space in the hearts and minds of those who celebrate them.

Anna Nikolova was looking for a master’s program and she wanted something different. She did not consider any universities in her home country of Bulgaria or elsewhere in Europe.

“[I] was looking in North America because I really wanted to travel and go far. I only applied to the University of Lethbridge,” she said.

Living in the dorms, she had high expectations for a vibrant campus life that was different from what she’d experienced during her undergrad in Sofia, Bulgaria. This choice was heavily influenced by the “very North American” media like Cartoon Network she watched growing up.

“I had only seen Lethbridge on google street view [but] I was very enthusiastic about living in a smaller town.”

“It was very much like the movies with campus life [..] I immediately fell in love with the energy. We had so many events at the beginning where everyone meets each other, Grad school events, campus events, major-specific events.”

Despite experiencing winter in her home country, Anna knew the Canadian version would be different.

“At the international student orientation, they warned us that no matter where we were from we wouldn’t know what it’s like. I was kind of prepared but it’s a physical experience so no matter how much you’ve mentally prepared until you feel it physically it’s very different.”

An early snowstorm caught her and her fellow international student roommates off guard and forced them to rush to buy some winter gear.

“The problem was after the snowstorm it got better so we basically did that for nothing. We went mid-snowstorm to look for winter clothing without actually needing it for a couple of weeks!”

Anna’s advice? “I would say don’t overthink it. Don’t come in shorts and flip-flops, you should be prepared for winter but not afraid of it. ”

Besides the essentials like a jacket, mittens and toque, Anna has another helpful tip.

“You just need a positive attitude because that will definitely help you warm up.”

Camila Dias has always had a thing for Canada.

“I ended up coming to Vancouver from December 2010 to March 2011 to study English, that’s when I fell in love completely.”

After that, she did an exchange program at the University of Lethbridge for a year and a half in 2014. When she realized she “needed a change” from the world of Biomedical Science she returned for her second degree in French and Spanish.”

The most enduring memories of winter for Camila involve waiting for the bus, something she’s had to do very often given the intermittent nature of Lethbridge’s public transit.

“Every time I think about winter I only think about waiting for the bus because if you miss one here in Lethbridge the next one comes in 30 minutes. If I missed the bus in the past I’d just keep moving on the sidewalk to keep my heat.”

“When you explain to people back home what winter is like they think everything stops and you stop your life because it’s cold outside but absolutely not, life keeps going.”

Camila has learnt to walk like a duck to avoid slipping on ice and picked up much of the winter knowledge that many Canadians take for granted. She believes winter is something you simply get used to and after a few years of dealing with it, she can see herself getting more comfortable.

“In the past, I used to have a gigantic boot that came up to almost my knee but now I don’t need that anymore,” she said with a laugh.