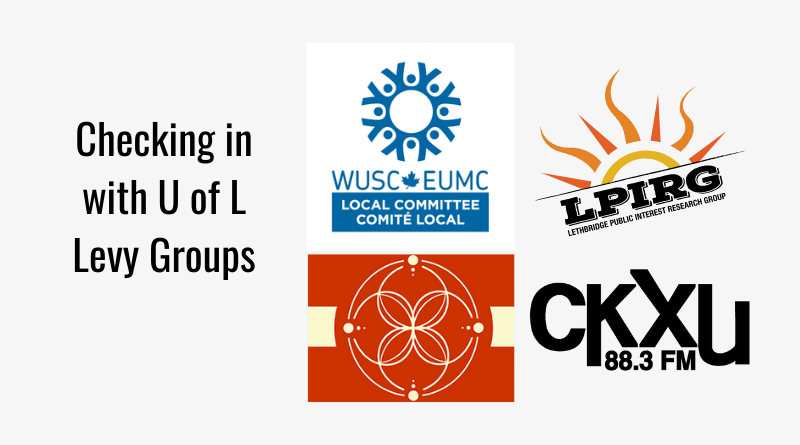 This article was written by Mikey Lewis

U of L students have been grappling with the realities of paying full tuition fees for online learning since March 2020. In this climate, added costs including mandatory non-instructional fees, recreational facilities, for example, have been placed under heightened scrutiny. In addition, discussions on student-run social media platforms such as U of L Confessions and ULeth Wildin show students’ concern regarding the fees paid to levy groups during this time. Although these critiques are not new for levy groups, the current context certainly seems to have heightened them.

The University of Lethbridge currently hosts five levy groups, each funded by a small levy that almost all students pay. These groups all aim to provide a service for students and the university community. The groups include the Campus Collective Centre, (formerly known as the Campus Women’s Centre), CKXU, the Lethbridge Public Interest Group (LPIRG), the Meliorist Publishing Society and the World University Service of Canada (WUSC). We will not be covering ourselves, despite our status as a levy group, due to the inherent conflict of interest. While the fees for all of these groups are automatically added to most full-time students’ tuition fees in every Fall and Spring semester, every student has the option to opt-out of their fee by contacting each group directly.

Current Centre Co-Coordinator Katie DeLucia describes the Campus Collective Centre as a “student-led space focused on inclusion, guidance and resources.” The Centre was established in 1998 by what DeLucia described as “a group of women addressing the lack of feminist spaces on campus and tackling issues around abortion and sexual health.” Shifting understandings of gender and intersectional feminism led to the group renaming itself. The Centre changed its name from the Campus Womens’ Centre to the Campus Collective Centre in order to provide an explicitly non-discriminatory space for U of L students of all genders.

The Centre is run by a non-hierarchical, consensus-based Collective which any student can join by attending two consecutive meetings. The Collective Board meets monthly to handle event planning, finance, and operations, while a small staff handles the day-to-day operations. The staff includes two Co-Coordinators and two other paid staff members that focus on peer support programming and community outreach.

Prior to COVID-19, the Centre held regular open office hours, special events, discussion periods and educational programs alongside having full-time volunteer peer support workers available to anyone in need. Students will likely know of the Centre’s wall of free menstrual and sexual health products stocked outside of the Centre’s space in SP150. These services have continued since the Centre went remote in March 2020, with all social events moving online and all supplies remaining available for delivery, including free pregnancy tests. The Centre also offers a micro-bursary which any student can apply for once a semester without any questions asked, as well as funding and event planning help for like-minded students.

Students began paying one dollar per semester toward the Centre in March 2004. The levy increased to three dollars in March 2017. These funds go toward purchasing the supplies given to students, paying the Centre’s staff and upkeep costs, running events, supporting community organizations and paying into the previously mentioned student emergency fund.

As with all levy groups, fees are first collected by the University Cash Office. In the Centre’s case, these funds are then passed along to a bank account managed by the ULSU. Although the account is managed by the ULSU, the Centre maintains financial autonomy, withdrawing funds at their discretion via a request for disbursement. The Centre’s financial details are available for students to review at any Collective meeting or by request.

CKXU is a non-profit, community-run radio station that has been operating out of the U of L since the early seventies. Originally a music broadcast sent out over Section A’s PA system in University Hall, the station, which records out of SU 164, has a coverage radius of about 120 km around the city and also broadcasts on www.ckxu.com and via TelusTV channel 7084.

CKXU’s daily operations are managed by four full-time, salaried staff members and two part-time honorarium recipients. This organization is overseen by a Board of Directors which is elected annually by members of the Society and includes representatives from both on and off the U of L campus.

CKXU prides itself on what current Executive Director Genna Bourchier describes as an ongoing commitment to “focus on Canadian musicians, emerging genres, and underrepresented identities.” The station facilitates this work through the efforts of a large team of volunteers who complete varied tasks including reviewing incoming music submissions, planning events, fundraising, hosting shows and more.

CKXU will provide a reference letter for any volunteers who contribute a minimum of 30 hours of volunteering. Students that apply to become CKXU members can also apply for jobs at the station and engage with CKXU’s many community partners to access discounts and other benefits.

While the vast majority of CKXU’s operations took place on campus prior to the pandemic, almost all of them have moved online since March 2020. Some staff have remained on-campus in order to maintain the station’s status as an emergency service and to ensure that the station is accessible for those who may not be able to record from home.

The levy, first introduced in 1996, was last adjusted in 2014. Students are currently paying $8.84 per semester, but the fee is now subject to a sliding scale tied to the Consumer Price Index (CPI) which will account for inflation. Bourchier stated that these fees cover the overhead costs for the non-profit organization, including salaries and broadcasting expenses.

Bourchier also explained that the Society seeks out additional grant funding for special initiatives and concerns, such as the purchase of at-home recording equipment for hosts to use during COVID-19 restrictions, or funding for their recent “For the Record” radio and live session recording program.

As of February 2021, CKXU has full control over their financial processes, including staff payroll, which had previously been handled by the ULSU. Bourchier stated that despite this newfound independence, the Society continues to maintain financial accountability through frequent reporting to the ULSU and ensuring that most of their levy funds are still held in a ULSU-run bank account. The station also makes a full financial review available at their Annual General Meeting, which takes place every September.

LPIRG, which began operating in 2003, is a student-funded and student-run non-profit focused on empowering post-secondary students to become more engaged citizens. As stated on their website, the group is part of a loose network of “PIRGs” across the United States and Canada. The goal of these groups is to provide students with the support and funding needed to allow undergraduate students to engage with environmental and social justice issues through self-started research projects, events and direct action.

The organization has one full-time staff role, the Executive Director, who works in the LPIRG office in SU 242. LPIRG also frequently hires students for part-time work. All major decisions are made by the consensus-based Board of Directors, which is composed of seven undergraduate students. Unlike other levy groups, LPIRG board members are elected by U of L students during the ULSU’s Student Council election period.

LPIRG moved off-campus in March 2020 as per COVID-19 guidelines. Any other details on how the group has adapted during the pandemic were not available on their website. Jennifer Prosser, LPIRG’s Executive Director, was unavailable for comment.

Students have been paying five dollars per semester to LPIRG since its referendum was first passed in March 2002. A brochure available on LPIRG’s website states that these levy fees are used “to fund student research, events, and projects demonstrated to be in the public interest, as well as providing additional administration, organization, and information resources to empower students to become engaged citizens.”

Information on how levy fees are managed was not easily found on LPIRG’s website, although they do state that all students can access their books and financial records upon request. They also state in their bylaws that, as per standard practice for registered non-profit societies in Alberta, that a financial statement should always be brought forward at their Annual General Meeting.

WUSC is a national non-profit organization that works to provide youth from 15+ countries with improved access to educational and economic support. Their flagship initiative, the Student Refugee Program (SRP), helps Canadian post-secondary students to raise funds and provide social supports to young adult refugees looking to relocate to Canada.

WUSC first arrived at the U of L in November 2015, when a small group of students worked together with Anne Dymond (Associate Professor, Art History) to establish a WUSC Local Committee in response to increased awareness of the Syrian refugee crisis. The Local Committee functions as a student-run club, featuring an active general membership, executive team, meetings, social events and fundraisers.

According to the Committee’s current Social Awareness Coordinator, Marissa Kamieniecki, paying into the levy gives students the opportunity to permanently change someone’s entire life “for less than the price of a cup of coffee.” Students more directly involved in the Committee can travel, develop professional skills and networks and gain extensive volunteer hours. For Kamieniecki, being a “WUSCer” has provided her with a way to “intentionally rethink the table, find new ways to bring people into the unit, and use my privilege to make space for someone else.”

Although they were able to sponsor their fourth student in December 2020, four months later than usual and with only two weeks to prepare, Kamieniecki shared that the current team is looking forward to a more standardized sponsorship process and club events in the 2021-22 school year. Facing the upcoming graduation of their last founding members, the Committee is actively recruiting new members and people to fill executive positions.

Undergraduate students have been paying two dollars per semester since the referendum was passed in March 2017. This money goes directly toward sponsoring one refugee student per academic year. Dymond, who remains the faculty representative for the Local Committee, stated that this money covers the basic funding requirements for one year of refugee sponsorship in Canada. All other Committee expenses are paid for by separate fundraising initiatives.

Once deposited into a ULSU bank account, the ULSU pays the university directly for the sponsored student’s housing and tuition fees and disperses the rest of the funds in monthly installments given directly to the student.

Conflict of interest statement: The author of this piece has previously been involved with several of the groups reported on in this piece. Their involvement includes being a previous member of the WUSC Executive Committee, helping to design revised branding for the Campus Collective Centre, and most recently being featured in CKXU-FM’s “For the Record” project. The author is not currently involved with any of these groups.