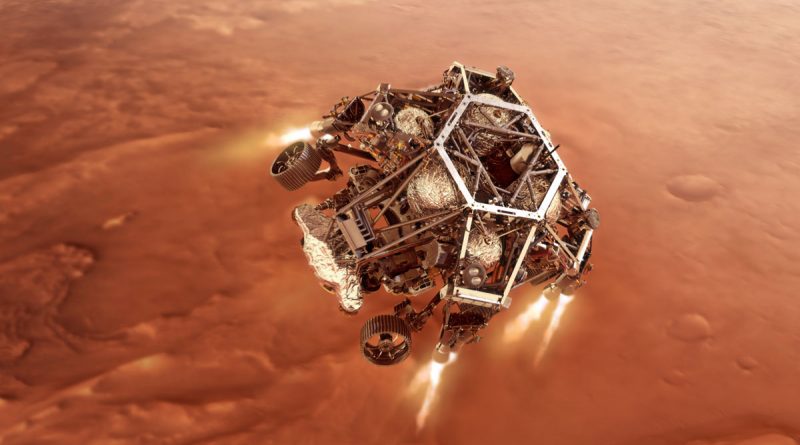 It’s been almost a month and a half now since NASA’s new Perseverance rover landed on Mars. Travelling over 472 million kilometres and plummeting at 19,000 km/h to land on the surface of another world is no small feat; the culmination of a couple of decades worth of engineering and know-how. Perseverance is the only rover to have landed on Mars since Curiosity in 2012 and is also decked out with a lot more bells and whistles, including its very own mini-helicopter to deploy. Already it’s providing us with a stream of newfound discoveries, including the possibility of water trapped inside the planet’s crust! For this month’s deep dive, let’s explore the technology that made this historic landing possible, and review the findings released by NASA over the past month.

Our journey starts on Earth at Cape Canaveral Air Force Station, Florida, on July 30th, 2020. A United Launch Alliance (ULA) Atlas V rocket successfully carried the rover into space. The rocket is operated by the ULA, a joint venture between Lockheed Martin (known for their fighter jets) and the more well-known Boeing.

The Atlas V rocket consisted of two main stages, the first powered by a Russian RD-180 engine burning a fuel mixture of kerosene and liquid oxygen. The Centaur upper stage is powered by a US-manufactured RL10 engine burning liquid hydrogen and liquid oxygen, which carried the rover payload into a parking orbit around Earth. The rover, encased in a protective aeroshell that includes a heat shield, was then propelled out of orbit towards Mars by a second firing of the Centaur rockets. Thrusters attached to the cruise stage manifold are able to make small corrections to the payload trajectory on its way to the Big Red, relying on NASA’s Deep Space Network (DSN) to provide positioning data.

The Deep Space Network is an international array of giant radio telescopes, as well as a few orbital telescopes that allow NASA to receive powerful X-band transmissions from the Rover. Aside from the DSN, spacecraft currently orbiting Mars such as MAVEN and MRO, are also able to relay information from the rover to our home planet. MRO can relay small chunks of data from the rover in almost real-time, contrary to what popular science fiction media will lead you to believe. In fact, due to the distance of travel between Mars and Earth, communications can be relayed in as little as 11 minutes and 22 seconds. Comm windows, however, limit when data can be transmitted once the rover is on the ground, due to the orbit of the various satellites.

This brings us to what Space Engineers refer to as the 7 minutes of death. Entry, landing, and descent, or EDL, are notoriously the hardest part of Perseverance’s journey. Having to plummet from space through Mars’ atmosphere at nearly 20,000 km/h requires some very sophisticated technologies. Upon separating from the cruise stage, the rover pod begins its dangerous descent. Upon nearing it’s intended landing trajectory, the pod will fire on-board thrusters to de-spin and position itself so the heatshield is facing downwards during the fall. As the spacecraft enters the atmosphere, the drag produced will naturally decrease its velocity a substantial amount, but also heats the surface of the craft to an astonishing 1300 degrees Celsius. The aeroshell and heat shield however, keep the rover inside safe and at room temperature. As the rover descends, small pockets of air can knock it off course, so once again the thrusters make minute adjustments for a guided entry.

Now at around 1,600 Km/h, a supersonic parachute is deployed, using a new Range Trigger technology to time the deployment and increase landing precision. The parachute is 21.5 meters in diameter and deployed at about 11 kilometres from the planet’s surface, slowing the rover to around 320 Km/h. The rover then cuts away the parachute and makes the rest of its journey down using only rocket thrusters. Finally, at around 20 meters from the surface of Mars, the pod will deploy a Skycrane Maneuver, lowering the rover from the descent stage manifold using a set of cables, depositing the multi-million dollar craft on a distant planet.

A simulation of the entire EDL can be viewed on NASA’s website and comes highly recommended for those interested.

Exploring the Surface of Mars

While Perseverance will be built off the original design of Curiosity, numerous upgrades to its mobility and data collecting instruments were implemented.

Landing in the Jezero Crater, just north of the Mars equator, Perseverance will analyze the area which scientists believe to have once been flooded by water. Focusing on this new field of “astrobiology”, the rover is equipped with cameras, a drill bit, and multiple chemical sensors to analyze its surroundings. Perseverance also comes equipped with a microphone, allowing us to hear the Red Planet for the first time in history.

NASA is also using the opportunity to test out new technologies that will pave the way for future exploratory missions. Perseverance has the capability to gather and store coring samples from Martian rocks in tubes, preserving samples in hopes that future missions could deliver them back to Earth. It also tests technology for extracting oxygen from the CO2-saturated atmosphere of Mars.

Finally, perhaps the crowning achievement of the rover upgrade is the Ingenuity Mars Helicopter. The helicopter will be the first attempt at achieving powered flight on a foreign planet and must be built strong and powerful enough to lift off in Mars’ incredibly thin atmosphere (less than 1% of Earth’s). Powered by solar panel charged Lithium-ion batteries, the 1.2 meter long blades have enough juice to sustain one, 90-second long flight per Martian day, and fly up to 5 meters up each time. While the engineers behind the design are optimistic, numerous challenges including the difference in gravity, atmosphere and climate have prohibited simulations here on Earth. NASA plans to have Perseverance film and document the historic test flight, coming soon in the month of April, allowing us all to witness the momentous occasion.

What Have We Learned So Far?

Although the Perseverance is just beginning its mission and will first look for an opportune location to launch the Ingenuity helicopter, an initial survey of the landing site has excited scientists world-wide. Using a laser instrument to zap at rocks nearby, Perseverance has revealed them to be chemically similar to basaltic rocks on Earth, which form from molten rock. These initial tests have revealed evidence of water being locked up in the rock’s minerals. Visually, darker-coloured rocks look as if they’ve been weathered by water instead of wind and dust, perhaps due to an ancient river flowing through the area.

In recent years, results from NASA’s Mars-orbiting MAVEN have attributed water loss on the Big Red to be due to atmospheric loss. We know that for some reason in the past, Mars lost its strong planetary magnetic field, allowing much of its atmosphere, and presumably its water content to be lost to space. However, a recent publication to Science by Caltech scholars who have been analyzing data from previous Mars missions revealed that the rate of atmospheric loss could not account for the disappearance of all water. The Perseverance’s findings corroborate the paper’s hypothesis that the water is instead locked in the form of minerals inside the planet’s crust.

University of Alberta’s Professor Chris Herd is actually a member of the Perseverance Rover mission as an expert in Returned Sample Science. His involvement will include choosing, along with a team of other scientists, which samples are collected and cached by the rover, as well as analysis of the samples once they are eventually collected and sent back to Earth. NASA schedules this collection to be 2031 at the latest, meaning we will likely be able to see results coming from our provincial university within the decade.