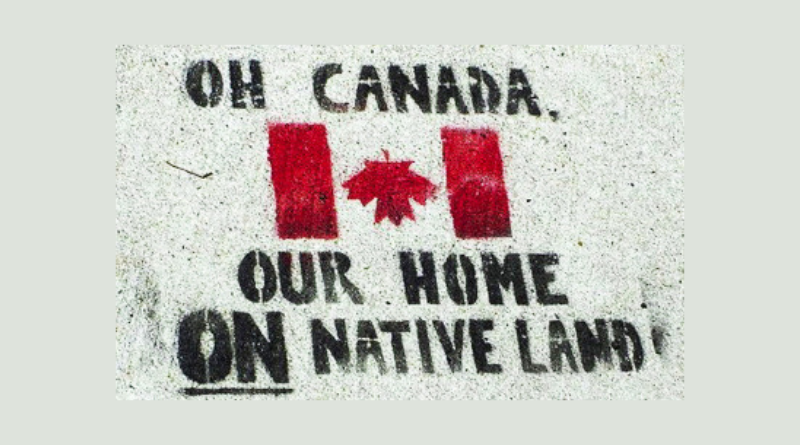 The land that we call ‘Canada’ was not always called so. The history of Canada is the history of settler colonialism—the sustained project of the displacement and replacement of this land’s Indigenous peoples with white colonizers to further the goals of white, imperial capital. As much as some would like to ignore it, this is Canada’s past and present. This month’s essay will provide a short introduction to settler colonialism as a term, and relate it directly and critically to national myths. This essay is in no way intended to be expansive or exhaustive in its examination of settler colonialism. Rather, my hope is that this will be an entry point for people who have not thought about the history of Canada and of colonization in this specific way to think more critically about our past, present and future on this land that we now call ‘Canada.’

What is settler colonialism?

Settler colonialism is defined by a few key points that separate it from other forms of colonialism. Put at its absolute simplest, settler colonialism is the systematic and violent replacement of Indigenous peoples and societies with a settler society that has “come to stay”. This is in contrast to other forms of colonialism, where the colonizers may ‘set up shop’ to exploit native labour, but they do not come to stay or build a society that is designed to replace the Indigenous one. Examples of settler-colonial societies include Canada, the United States, Australia and New Zealand, in contrast to more ‘extractive’ colonies like the British, Portuguese and French presences in the Indian subcontinent.

Generally speaking, much of settler colonialism is based on two intertwined doctrines, terra nullius and the doctrine of discovery. Terra nullius, literally meaning “nobody’s land,” is the outdated legal principle that if the land is deemed to be unused, then it can therefore be occupied by someone else. In the case of settler colonialism, lands occupied by Indigenous peoples, such as North America, Australia and Aotearoa New Zealand, were deemed by European empires to be “unused,” as the Indigenous civilizations that lived on these lands had different social structures than European Christian monarchies. Mainly, this difference was a perceived lack of land cultivation in the European sense (despite many First Nations having sophisticated agriculture) and a generally more communitarian ethic than the mercantilist and later capitalist European powers.

This is where the doctrine of discovery comes in. Broadly conceptualized, the doctrine of discovery is the assertion that since a territory is not occupied by a people that are European and Christian, and the European Christians that “discover” such a territory can lay claim to it–the land is rendered empty. Indigenous peoples did not share the European idea of property ownership, so European empires did not think that they had title to the land, and thus the land could be taken. This doctrine, that Indigenous peoples do not have title to their lands forms the legal basis for settler colonialism, and thus, the Canadian nation-state.

In 2010, then Prime Minister Stephen Harper claimed that Canada has “no history of colonialism.” Two years prior, he had delivered a public apology in Parliament to survivors of the genocidal residential school system. In Canada, colonialism often goes ignored as a structure that has defined this country, even when we are dealing with the after-effects of past colonial endeavours and the ramifications of new ones.

Patrick Wolfe, an Australian anthropologist writes: “When invasion is recognized as a structure rather than an event, its history does not stop—or, more to the point, become relatively trivial—when it moves on from the era of frontier homicide.”

What Wolfe is arguing is that it’s easy to think of colonialism as something in the past when the most visible manifestations of it are in history books and social studies classes– the “frontier homicide.” But the existence of a settler society like Canada is dependent on both recognizing the presence of Indigenous peoples, but also constantly disavowing their relevance. Put simply, ‘Canada’ would not exist without stealing Indigenous land.

Canadians have come up with interesting ways to justify the existence of a ‘Canada,’ and we need to look no further than one of our national sports, lacrosse. Lacrosse is a settler interpretation of a traditional sport played by many First Nations, including the Haudenosaunee and the Ojibwe. In her book Becoming Native in a Foreign Land: Sport, Visual Culture, and Identity in Montreal, 1840-85, Gillian Poulter argues that with lacrosse, settlers were taking the veneer of something native to the land that they were now inhabiting and synthesizing it with regimented European sport culture to create something that seemed uniquely “Canadian.”

Further, Poulter argues that it was not in the trenches of the First World War that Canadians created a national identity, but in the crushing of the 1885 Northwest Resistance. In 1885, a Canadian expeditionary force ventured out west to crush Metis and First Nations forces who were rebelling against the colonial policies of the Canadian government. With the Canadian victory, any sense of internal border or other could be extinguished, and the presentness of settler colonialism began to fade into the background for most settlers, now content that Canada could build a transcontinental railway and emerge as a new nation.

If settler colonialism is Canada’s past and present, then what of Canada’s future, and what of the future of Indigenous peoples? While speculating on such things is out of the realm of this essay, I will refer to some Indigenous writers that are proposing new avenues for Indigenous resistance beyond the settler colonial present.

Leanne Betasamosake Simpson, a Michi Saagiig Nishnaabeg scholar, argues for a radical resurgence of Indigenous resistance in her book As We Have Always Done: Indigenous Freedom through Radical Resistance. In this work, Simpson proposes new ways of conceptualizing Indigenous resistance that go beyond the constraints and logics of the settler-colonial state.

Glen Sean Coulthard, a Yellowknives Dene scholar, examines the role of the politics of recognition in Indigenous resistance in his work Red Skin, White Masks. Coulthard argues that Indigenous movements should not seek recognition from or reconciliation with the colonial state, but work to build up and “redeploy” Indigenous culture in a way that builds self-recognition.