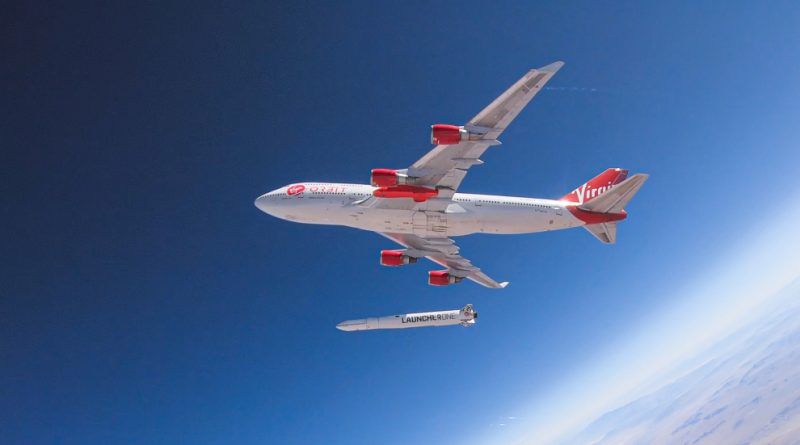 Alright, alright, I know you’re probably sick of reading about space and rockets, but a 70-foot rocket, riding on a modified 747, blasting off into earth’s orbit is too cool not to share.

The satellite launch was the first of California-based rocket startup Virgin Orbit, who are part of the Virgin group of companies more commonly known for their telecommunication services. The company aims to provide premier satellite launch services in a fast, flexible, and affordable  manner. On Sunday, January 17th, 2021, they conducted their first successful launch of it’s LauncherOne rocket, which they will use to deploy small satellites to orbit in the coming years. With this milestone under their belt, Virgin Orbit will join SpaceX and Rocket Lab as the third “New Space” company, and already has plans to expand into the commercial spaceflight market.

The rocket was tucked under the left wing of a modified Boeing 747 plane, endearingly nicknamed Cosmic Girl and carried to an altitude of 10,700 m above the Pacific Ocean. It then separated and fired its NewtonFour engine to leave the earth’s atmosphere and reach its target orbit. Although this was a test launch, the LauncherOne rocket contained 10 CubeStar satellites that are part of NASA’s CubeSat Launch Initiative (CSLI) program.

The CubeSat program began in 1999 as a collaborative effort between Jordi Puig-Suari, a professor at Cal Poly, and Bob Twiggs, a professor at Stanford University, aimed at providing affordable space access for the university science community. The NASA Launch Initiative allows for qualified CubeSats, which are small satellites around 10 cm x 10 cm in size, to be launched as auxiliary payloads in the plethora of space-launch programs they take part in. Virgin Orbit’s CubeSat payload was designed and built by universities across the US, many of which have capitalized on the CSLI to jumpstart small space programs on their campuses.

After 4 years of development and a failed launch back in May, 2020, the recent success is no doubt gratifying for the start-up who has customers including NASA and the US military lined up.

Space companies were given special clearance to continue operations throughout the Covid-19 Pandemic after the government deemed them critical infrastructure back in March, 2020.