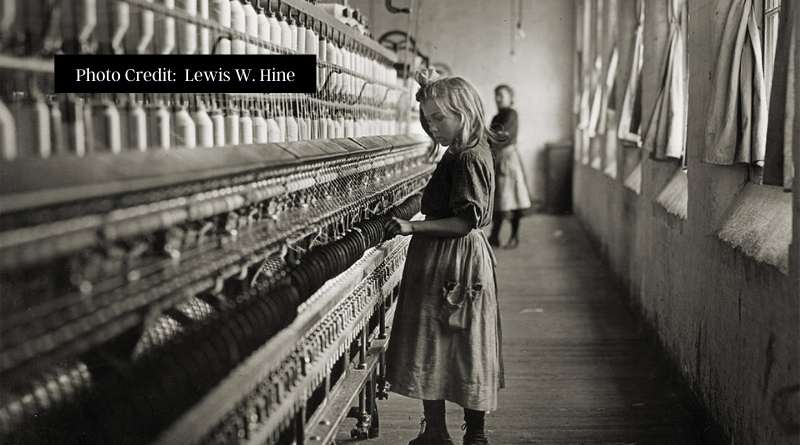 Historians have only recently viewed the family as a viable historical subject. Even newer is the study of children. Despite the lack of research, children’s lives can help illuminate the past and influence our perspectives on the future. Examples of children’s work can be found abundantly in the historical record, however, defining that work is more challenging. Today, child labour evokes images of sweatshops and third world mining operations. In the past, paid and unpaid labour comprised a significant amount of children’s time, as they were seen as miniature adults rather than a unique category of humans. What was considered acceptable levels of child labour in the 19th and 20th centuries are illegal or frowned upon today. Nevertheless, children’s work is still a necessary and valuable part of the family economy. The increase and subsequent decrease in child labour, both in the home and outside of it can be traced back to industrialization and urban migration. An interdisciplinary approach is useful in understanding changing perceptions of labour and childhood in a way that will help bring change in the modern Canadian context. This paper will first examine childhood and children’s work as it has evolved since the 19th Century.

The study of children as historical actors began with Philippe Aries’s 1960 publication, Centuries of Childhood: A Social History of Family, however, the research didn’t begin in earnest until the 1980s. These scholars started by looking at 19th-century families in Britain, Canada, and the United States. This was the obvious choice, due to the incredibly high rate of visible and invisible child labour, as well as the availability of source material. Industrialization and urbanization reached their height at this point and poverty rates skyrocketed. Conceptions of childhood also shifted during this time, culminating in the mid-20th century, leading to child labour laws, child-saving societies, and education reforms. It is an important part of the narrative, allowing modern-day children’s work to be contextualized. By learning why child labour was carried out in the past and how childhood itself was thought of, scholars can better understand how those conceptions are carried into the modern era.

Urbanization in the 19th century bred new issues for parents, children, and the Canadian state. Historians John Bullen and Magda Fahrni outline early child-saving in Canada. The image of the child as a purely innocent being, separate from adults emerged from the writings of Jean Jacques Rousseau and several Romantic poets.  Nearly a century later, law enforcement and politicians began to take issue with the increase in children on the streets of Canadian cities. Children could increasingly be seen selling newspapers, fruit, small wares or performing and shining shoes. Local Authorities and concerned adults began to worry about the degradation of young morals. In an attempt to control the number of unsupervised children on the streets, labour and education laws were put in place.  Regardless of these laws, many children continued to work on the streets as well as in the home. Child-savers in the 19th and early 20th centuries continued to campaign for young lives, on the basis that children were innocent but also out of fear that moral degradation would negatively impact society as a whole. Orphanages gave way to an early form of state or foster care. Unfortunately, many of the children in these placements ended up as cheap or free labour for their host families.  Early-twentieth century Canadian law viewed child labour as any paid work under the age of 14, synonymous with the age children were expected to be in school.  Compulsory education began to replace paid and unpaid child labour. The process took time since children remained essential elements of the family economy.

Child labour, both paid and invisible remained relatively common until the 1960s. Before this time, many children left school at the age of 15 to work. At the same time, children were increasingly being seen as a distinct category of human being. One that needed extra care and protection. For much of the 19th and early 20th centuries, children placed in care were treated as indentured servants rather than children. Young people from Canada and England were placed in Canadian homes to learn marketable skills and provide labour for the host family. This practice continued even after child saving organizations formally spoke out against the practice. Female youth were far more likely to be fostered or adopted because of their perceived skills in the home. These skills were also marketed to potential families to stimulate interest.

Welfare responsibilities slowly transferred from the family to the state, the latter of which focussed heavily on middle-class, white-dominant values. It was thought, as it is today, that children thrive better in a family environment. Orphanages began to wane in popularity and the foundations of welfare agencies and foster care were built. Not all children were treated the same, however, and mass groupings of children in state institutions prevailed. One of these institutions was the asylum. Children who did not fit within the dominant neurotypical environment often found themselves living on the streets, in houses of refuge or workhouses. This was “unseemly” and many protestant groups sought to prevent this by helping the “deserving poor,” before they became adults. Asylums have a long history of abuse, neglect and unethical medical practices, even in Canada. It didn’t help that understandings of the human brain were very limited for much of this time. Unlike other child welfare agencies, asylums weren’t always able to turn their wards into cheap labour for the market, instead forcing upon them a life-long stigma.

Child-savers characteristically shut out a large portion of society, namely Indigenous peoples, people of colour and “undesirables”. The treatment of vulnerable and impoverished children was not exclusive to any race but Black and Indigenous children in Canada have historically been seen as lacking the same innocence as their White peers. Ironically, while in state care, Black and Indigenous children were, and continue to be, viewed as especially vulnerable. The mistreatment of racialized and immigrant children in state care goes back as far as welfare institutions themselves. Early welfare systems were not put in place to better the lives of vulnerable children, but to maintain the social order and remove “undesirable” people from public view.