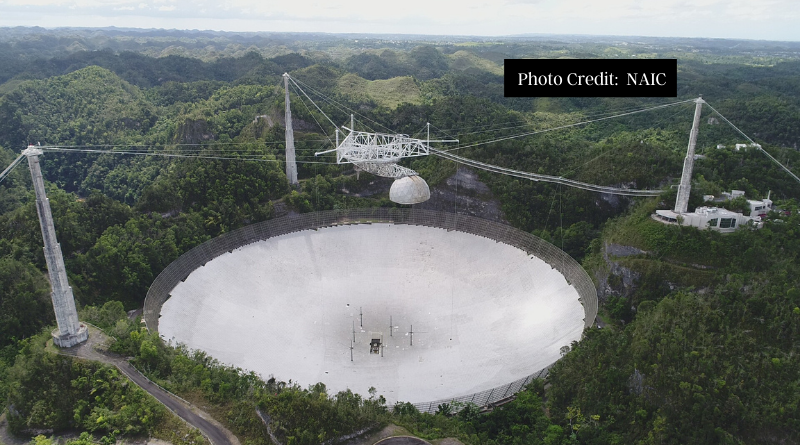 The Arecibo Observatory, situated in Arecibo, Puerto Rico suffered catastrophic damages on December 1st, 2020 due to the 900-ton instrument platform collapsing onto the telescope dish. Many in the scientific community are grieving the loss of the radio-telescope and criticizing the lack of government funding to maintain the facility.

The observatory is owned by the US National Science Foundation and was originally completed in 1963, the largest of its kind at the time. The main dish, being a major landmark in Puerto Rico and featured in movies such as the Bond film “GoldenEye,” spans 1000 feet in diameter and an 869-foot radius of curvature. The US military, who paid for its construction, initially used it to better understand the earth’s ionosphere for missile guidance systems, but the iconic telescope has been instrumental in a number of other research programs throughout the decades. In the 1960s its radar maps of the moon helped NASA plan out landing sites for their Apollo missions. The 1974 Nobel Prize in physics was awarded to the discovery of the first binary pulsar (neutron star system) by Hulse and Taylor who were completing their PhD dissertations at the observatory. In a previous article in the Meliorist, we’ve also talked about how the Arecibo was used to transmit signals into deep space for the purposes of searching for extraterrestrial life. The enormity of Arecibo made it useful for radio-astronomy research, being able to detect very faint objects in deep space and out-performing similar telescopes in North America. Another unique design aspect of the Arecibo telescope was its ability to transmit as well as receive. The current world’s largest radio-telescope, FAST, situated in the Guizhou province of China doesn’t have this capability, nor do most others. The transmitters allowed Arecibo to bounce radio-waves off distant asteroids or planets, giving valuable information on the target’s size, shape and motion.

Funding for the large scale radio-telescope facility began to decline in the early 2000s, with NASA decreasing and finally eliminating their financial support of planetary radar in 2006. Academics have responded by establishing the Arecibo Science Advocacy Partnership (ASAP) in 2008 to seek outside funding. Despite best efforts, however, multiple hurricanes in the region throughout the years caused sufficient damages to warrant concerns over the structural integrity of the facility and on August 10th, 2020, an auxiliary support platform cable broke causing severe damage to the main reflector dish of the telescope. A second devastating break of a main support cable sealed its fate leading the NSF to officially announce its decommission in November. A final support cable failure led to the main receiver platform crashing down on December 1st.

China’s FAST administration has stated that they would start taking applications for international researchers to use their radio-telescope following the tragic loss of Arecibo.