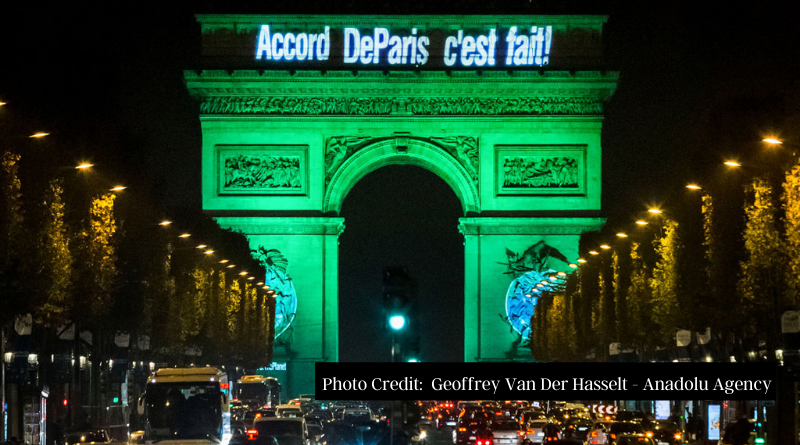 The Paris Accords were a legally binding international treaty on climate change signed by 175 parties of the United Nations Framework Convention on Climate Change (UNFCCC) including the European Union, China, and the United States. The policy was finalized on December 12th, 2015 and entered into force the following November. This year of 2020 marks the deadline for participating countries (now 195 states including the E.U.) to submit their Nationally Determined Contributions (NDC’s) formally communicating the actions they will take to reduce Greenhouse Gas emissions and measures to adapt to the impacts of rising global temperatures. The Accords provide financial, technical and capacity building frameworks for international support, particularly for developing countries that require foreign aid. Progress will be tracked starting in 2024 under an enhanced transparency framework (ETF), which mandates that all participating countries report transparently on their actions and metrics to the governing body.

On August 4th of 2017, the Trump administration of the United States government delivered official notice to the U.N. that the country intended to formally withdraw from the accords, and implementation went through in November 2019. The US government is the first and only country to withdraw from the agreement, joining Iran and Turkey as the only three countries worldwide with over 1% share of global Greenhouse emissions not to participate. Following the November 2020 US election, president-elect Joe Biden has announced he would be renewing the United States’ participation in the agreement on his first day in office.

A number of academic bodies have criticized the accords, however, stating that the timeline is too slow to combat permanent effects of global warming and that none of the major industrialized nations were actually meeting their pledged emission targets as of 2017 (Victor et al, Nature, 2017). The world Climate Clock launched in 2015 in tandem with the Paris Agreement is hosted by the Human Impact Lab at the University of Concordia and is updated each year to reflect the date shown when we will reach a 1.5 oC increase in global averaged temperatures compared to pre-industrialized levels. The Special Report on Global Warming of 1.5 oC, published by the Intergovernmental Panel on Climate Change in 2018 which includes over 6000 scientific references from over 40 countries stressed the importance of limiting global warming to below 1.5 degrees, as any higher would result in increased risks to “health, livelihoods, food security, water supply, human security, and economic growth.” Permanent damage to the world ecosystem at a 1.5-2 oC increase including sea-level rise and death of all coral reefs are illustrated in the now-famous publication. According to the world Climate Clock, as of December 1st, 2020, the 1.5 oC threshold will be breached in 7 years, 31 days and 7 hours, much sooner than the Paris Accords’ mid-century goal post.

In late September of 2020, artists Gan Golan and Andrew Boyd controversially repurposed the “Metronome” in New York City’s Union Square to display the world Climate Clock in an attempt to “remind the world every day just how perilously close we are to the brink.”

So where are we now? Michael Oppenheimer, a climate scientist at Princeton University claims the Paris Accords deserve a D or an F letter grade “based on whether we have any prospect of meeting a 2 oC target.” Many countries, however, are trying to expedite their pledges, including China – the world’s leading source of emissions – who aims to achieve carbon neutrality by 2060. In December of 2020, the European Union agreed to plan for a 55% reduction in emissions by 2030. With the onset of the Covid-19 pandemic, an article published in Earth System Science Data has also estimated a 7% decrease in emissions this year. However, progress is still slow compared to the perilous timeline being displayed in Union Square and the 1.5 oC threshold won’t hold without dramatic changes worldwide.

The Climate Ambition Summit reconvened on December 12th, 2020, on the 5th anniversary of the Paris Accords with 75 leaders outlining new commitments in an effort to make climate change a top priority in the global agenda. New commitments state how countries representing around 65% of global CO2 emissions have pledged to reach net-zero emissions or carbon neutrality in the next two years. Concrete plans and actions are expected to be in place by the Glasgow Climate Conference (COP26) held at the end of next year. Countries committing to much stronger NDC’s at the summit included Argentina, Barbados, Canada, Colombia, Iceland, and Peru, while others have pledged ambitious dates to reach net-zero emissions: Finland (2035); Austria (2040) and Sweden (2045).