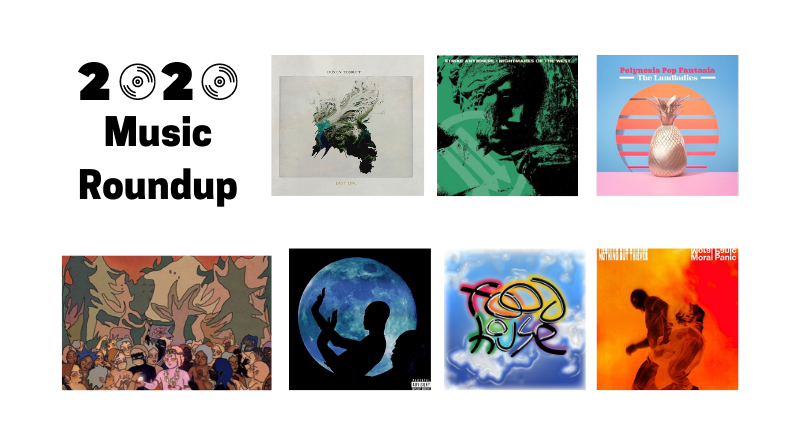 Decades! What a concept!

Humans love creating arbitrary divisions of time and trying to make sweeping conclusions as to that time’s significance. The 50’s were conservative, the 60’s were radical, and the 70’s? Well, they had Fleetwood Mac, I guess.

There’s no doubt that 2020, with the coronavirus pandemic, a crazy US election, and a general vibe of society falling apart at the seams, will usher in some sort of cultural trend for the years to come. But what is that trend? And what sounds may begin to define that trend?

Who knows! We don’t! But we will tell you what records we liked, why we liked them, and why they may come to help define the 2020’s. And we’ll tell you in one of the most enduring forms of writing of the last decade–the listicle. Without further ado, and in no particular order, The Meliorist’s first annual Year-End Music roundup!

Salient Quote: “I used to fantasize about being or kissing Skrillex / I need to delete Twitter because it gives me fucking mental illness.”

What does a combo Target/CVS, Skrillex, and “Sonic the Hedgehog” villain Rouge the Bat have in common? Damned if I know, except they are all found in the lyrical non-sequiturs that piece together the bizarre imaginary that Fraxiom and Gupi envisage in their debut record as the duo food house. food house takes the bombastic synth-laden soundscape of contemporaries and Dog Show labelmates 100 gecs and take it in a direction that is chaotic, queer, irresistably dancable and exuberantly youthful. The sound of a generation avant-garde– on poppers.

Key track: Is Everybody Going Crazy?

Salient Quote: “The day doesn’t set / the world just spins / and in this wounded, sinister place / we’ve only got each other.”

Nothing But Thieves’ third studio album wasn’t produced during quarantine, but it captures the zeitgeist with shocking authenticity. From frenetic anthems of political unrest (“Unperson,” “Can You Afford To Be An Individual?”) to vulnerable, heart wrenching declarations of love (“Impossible,” “Real Love Song”), the Essex natives seem to have bottled 2020. Lead vocalist and guitarist Conor Mason continues to wield his voice like a weapon, cutting just as deep with his seductive murmurs as his soaring falsetto. In combining that voice with powerful beats and dissonant harmonies, the group have crafted a cathartic album that will have you dancing, sobbing, and screaming in rage.

Salient quote: “We can become more than this / Scratched on a napkin, last call at the bar / We deserve to fight for everyone/For all that we’ve lost, for all that we are.”

Strike Anywhere’s new EP is a fervent reminder that punk is not dead and neither is the gusto behind it. Nightmares of the West captures the frustration, anger and political upheaval that has categorized 2020. Still, the band managed to infuse the work with a sense of hopefulness and community support. The EP is more melodic than hard core punk tends to be, making it a good introduction to those not familiar with the scene. It’s loud, its anarchist, its anti-fascist. What more could you want?

Edmonton based jam band’s debut album Polynesia Pop Fantasia is quirky and fun with songs ranging from easy fun listening in “Ugly Lights” to post rock realness in “Scenarios”. As someone who doesn’t focus much on lyrics, their nonsensical stream of words make for good background and study music while the strong layered instrumentals keep me vibing in my seat. The diversity of musical genres in this album definitely deserves a spotlight for local talent and I encourage everyone to give them a listen!

Salient Quote: “When we forget the infection / Will we remember the lesson/If the suspense doesn’t kill you something else will.”

This album is particularly fantastic because it was all recorded in quarantine.  It touches upon the biggest topics of 2020. “The world doesn’t need light-hearted pop-music right now – it needs anthems for anger. There’s so much to be pissed off about” lead singer Oli Sykes told NME. The band collaborates with a lot of other artists, including BABYMETAL, YUNGBLUD, Amy Lee and the producer of the doom soundtrack, Mick Gordon. It is harder than the last few of their albums, which makes my baby emo heart soar.

Dustin Tebbutt describes “White Water” (the first track on the album) as an ode to the strength and support created by those we cherish most. It belongs on a year-end list in a year like this because in a time when we are so separated, we need a reminder of our strength. Tebbutt’s music has always felt comforting to me. I am no music expert, but Google told me the genre is indietronica, a combination of elements of indie, electronica, rock, and pop music. Due to his vast crossing of genre elements, there’s a song in Tebbutt’s discography for everyone.

At just under 15 minutes the follow up to Odunsi’s disco and funk leaning debut album is more charcuterie board than buffet. While his last project leaned into the past, this one sounds like the future. Nigeria’s alternative Alté movement has always been defined by what it isn’t. This gives artists that fall under that umbrella license to explore outside of the country’s afrobeat musical monopoly. The EP pulls from a wide palette of sounds from alt-R&B, to synthpop to trap. All mixed together to create a sound that is uniquely Odunsi. And that’s what makes it fun, you never know what you’re going to get with him.

Are you interest in The Meliorist news & calls for articles? Fill out the form below to subscribe to our newsletter!