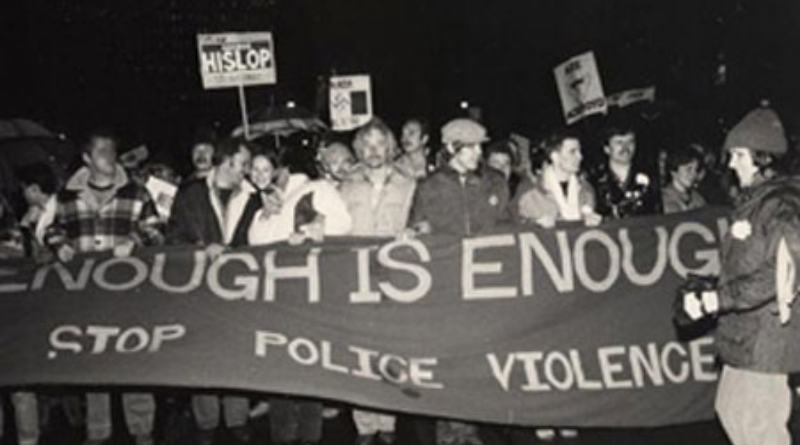 Pierre Trudeau famously said: “There’s no place for the state in the bedrooms of the nation.” He said this in 1967, then Justice Minister in the government of Lester B. Pearson. Trudeau was about to introduce an omnibus bill that would bring about sweeping reforms to the Criminal Code of Canada, one of which was the decriminalization of homosexual sex in private spaces. These reforms would be passed in 1969. However, historians and other scholars of the LGBTQ+ community in Canada disagree that Trudeau’s reforms actually decriminalized homosexuality. Some scholars, like Tom Hooper, argue that Trudeau’s reforms recriminalized homosexuality, provoking police to persecute queer people who did not have the luxury to solely meet in private, with raids on bathhouses, cruising spots and gay bars. These spaces provided crucial connection and community for queer people, and following this reform, they were put in a more dangerous situation.

This month, I’ll be looking at the Criminal Code reform, the reasoning behind it, how it affected queer people in Canada, and what its legacy is today.

The move to decriminalize homosexuality in Canada had its origins in the United Kingdom. Following a series of high-profile trials convicting men of homosexual offences, such as Lord Montagu of Beaulieu, the Conservative government struck a committee chaired by Sir John Wolfenden to examine the laws around homosexuality (which at the time was a total prohibition on homosexual acts) as well as prostitution.

The Wolfenden Report, released in 1957, recommended: “that homosexual behaviour between consenting adults in private be no longer a criminal offence.” In 1967, the British government passed the Sexual Offenses Act, which put this recommendation into law, setting the age of consent for “homosexual acts” at 21.

It is a mistake to believe that the Wolfenden committee made these recommendations as a gesture of pure compassion and respect towards queer people. The shift at work within this committee was to understand homosexuality as a psychological problem, treating it like any other form of mental illness, thus necessitating professional psychological care. To put it bluntly, you were not a criminal, you were ill.

In the same year, Canada began to reckon with these questions. Everett George Klippert, in a controversial case that made its way to the Supreme Court, was found guilty of four counts of “gross indecency;” having consensual gay sex with four men. Klippert was sentenced to indefinite “preventative” detention. Some saw this case as a moment for Canada to move towards the Wolfenden model, including NDP leader and architect of universal healthcare, Tommy Douglas. Douglas asked Pearson in the House of Commons in 1967 to pursue reform along the lines of the Wolfenden Report. Douglas said: “homosexuality is a social and psychiatric problem rather than a criminal one.”

In 1969, now with the charismatic Trudeau as Prime Minister, these reforms would be put into place.

Does the state have a place in the bathhouses of the nation?

Members of Parliament from all parties expressed skepticism that this reform, making homosexual sex between two adults legal in private, would actually decriminalize homosexuality. Mostly this was an exercise in assuaging any anxiety Canadians had about tacitly accepting homosexuality with this reform. Again, this was a part of the shift from understanding queer people as criminals to understanding queer people as mentally ill.

Queer people saw it differently. The state was never really in the bedrooms of the nation, in some ways. It was not queer sex in private that merited police attention, but it was queer sex in public and semi-private spaces, like bathhouses and parks. Three provisions within the Criminal Code that were not reformed by Trudeau include “gross indecency,” “indecent acts,” and the bawdy-house law. Police used the indecency provisions to arrest queer people, often queer men, at cruising sites like public parks, and used the bawdy-house law to raid and shutter bathhouses.

Queer people resisted this persecution through organizations like The Body Politic newspaper and the Right to Privacy Committee, which chronicled the statistics for the arrests on the charges of gross indecency and indecent acts.

The bawdy-house law, initially designed to prevent against sex work being offered at massage parlours, was only operationalized starting in 1968, to raid gay bathhouses. Notable raids include the raid on the International Steam Baths in Toronto on October 28, 1968, raids prior to the 1976 Olympics in Montreal, and the 1977 raid on the Truxx bathhouse in Montreal.

During the Truxx raid, fifty armed officers with automatic weapons stormed the bathhouse, arresting 146 patrons under the bawdy-house law. The Truxx raid and the community response led by l’Association pour les droits des gais du Québec that followed laid the groundwork for resistance to this wave of police persecution. The raid and the resistance that followed ultimately lead to the inclusion of sexual orientation in the Québec Charter of Human Rights and Freedoms.

With the activism of groups like the Right to Privacy Committee and l’Association pour les droits des gais du Québec, and some key legal decisions, police persecution of queer folks at that high level slowly began to subside.

In 2017, Prime Minister Justin Trudeau, the son of the man who instituted the Criminal Code reform, apologized to LGBTQ2S people. He referred to his father’s efforts as “partial decriminalization,” and thus imperfect, but put a great deal of attention into commemorating the decriminalization myth, with the Canadian Mint releasing a commemorative coin, and providing funds to non-profit Egale Canada to produce a documentary film commemorating this.

Anti-69, a network of scholars including the U of L’s own Dr. Suzanne Lenon, seeks to refute the commemoration of the 1969 reforms and draw broader attention to the Canadian government’s many failures on queer issues.

They write on their website: “We argue that no such decriminalization took place, and these efforts at commemoration only serve to perpetuate a myth. This myth is being used to legitimize Liberal governments, both past and present, as pro-Lesbian, Gay, Bisexual, Trans, Queer, or Two-Spirit (LGBTQ2+).”

If there is one thing for certain about this mythology, is that mythology is powerful. Myths have real-world consequences and can overshadow real-world oppression.

McCaskell, Tim. Queer Progress: From Homophobia to Homonationalism. Toronto: Between the Lines, 2016.

Are you interested in The Meliorist news & calls for articles? Fill out the form below to subscribe to our newsletter!