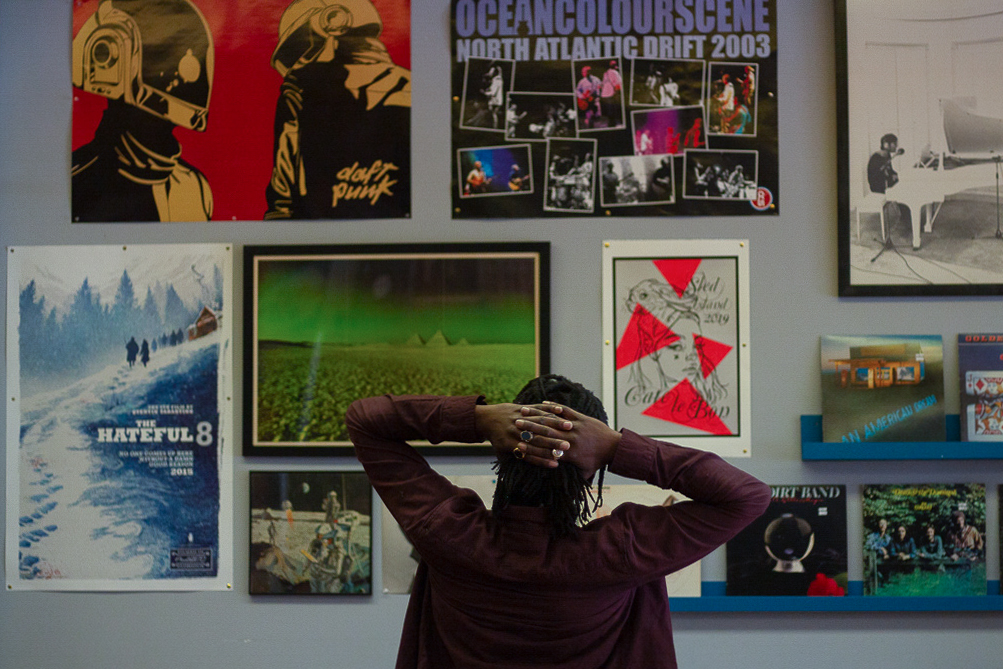 It’s difficult to imagine that the easy laughing man I’m listening to speak about yoga and meditation on zoom is the same person a teacher once said would die before 18 if he didn’t change the path he was on.

“I was an angry fucking kid […] people knew me as that kid who could go off at any minute. You grow up around people who do things to survive and you kind of embody that mentality.”

Raised in London, England, Ollie X, whose real name is Ollie Okeowo, speaks with a noticeable accent. Although, its South London edges have been softened by seven years in Southern Alberta. Brixton, the neighbourhood he grew up in, is steeped in history. It is where Britain’s Windrush generation of Caribbean migrants first settled and found housing in the 1940s and ’50s. That Caribbean influence is prevalent in the Reggae, Soca, and Bashment music that surrounded him growing up.

But the music that most defined his youth is Grime, a genre of street music that emerged in London in the early 2000s. Typified by aggressive lyrics and hard-hitting electronic instrumentals at a breakneck 140 Beats Per Minute tempo.

“You’re listening to a lot of the Grime stuff in your circle and you’re not listening to the other guys because we don’t fuck with those guys.”

A young Ollie was steeped in the music and the culture surrounding it. The lyrics painted vivid images of street life in London that reflected his reality at the time. It was over these beats he wrote his first bars, acting as a ghostwriter for a friend who had the street cred but not necessarily the pen to match.

When he speaks about this past Ollie draws a rough outline, just enough for you to understand the person he was almost a decade and 4000 miles ago.

“The fact that my parents even knew I was connected. People going up to my mom saying I know your son let me carry your bags, or she’s good don’t touch her. She’s like what the fuck is going on? […My parents knew half of my friends that had died. They could literally count on more than 10 of their fingers to be like this is the amount of people you personally know that have died from knife violence.”

Eventually, the death of a close friend would be the final straw, pushing him to find solace wherever he could.

“[My parents] were like enough is enough, it’s not getting any better and at the time I was just grieving and was like get me the fuck out of here, anywhere but here is better.”

That is how, after a stay in his parent’s home country of Nigeria he ended up in Lethbridge at 19 to start university. The change from colourful Brixton to the muted tones of the Canadian Prairie was difficult at first.

“When I first moved here it was like -40. I just moved into this apartment with a roommate I didn’t even know. I looked up something on Kijiji and paid the damage deposit via PayPal. I got here and I was not surrounded with friends or family I grew up with”

“I was just so used to the excitement of a big city […] Back home I was able to go outside and you would see somebody or something that was happening but over here I would walk out and there would be nothing. There are deer walking around the street!”

That time alone led to reflection.

“When it’s just you those thoughts that you never really acknowledged, or you don’t want them to grow in the back of your head they come out.”

As he began to settle into the city, he made friends with a group of guys who were involved in the Hip-Hop scene. They told him the mic was turned off to trick him into recording his first verse after spotting his talent during freestyle sessions. Despite his initial reluctance, music became a release.

“It was very much therapeutic because you’re able to work alone on music Friday, Saturday, Sunday night. Instead of getting up to some madness you just open the notepad and start writing and before you know it it’s 2 AM […] I honestly don’t know what I would have been doing if I wasn’t able to work on music.”

Alongside his friends, Ollie formed the brash and braggadocious Hip-Hop quartet Rougies Clique. They were a mainstay in the underground scene in Lethbridge and Calgary between 2014 and 2016. Amassing over 10,000 listens on Soundcloud and performing at Sled Island and One Love festivals.

Ollie’s Grime background gave him a unique edge. He could find and ride pockets of the beat that others couldn’t and his off-kilter flows and cadences excited both audiences and collaborators.

As a solo artist though, Ollie yearns to make stuff like the music that resonated with him the most. Songs like the Fugees Ready or Not, or Kendrick Lamar’s Sing About Me (I’m Dying of Thirst) that combined rhythm and melody with real-life situations and lessons.”

“My Journey has taught me so much about music, myself, and people. I just kind of realized the message I wanted to leave with music had changed over time. There was more that I wanted to say that I felt like when you’re in a group you’re not able to say as much.”

These days he records himself. Stretching his voice in various directions not aiming for vocal perfection but the perfect way to convey emotion.

“If I don’t experiment, I don’t know what will be good and what won’t be good.”

He pulls from Blues, Jazz, and R&B citing Sade, Tracy Chapman, and Muddy Waters as influences. His latest track Melody, a collaboration with local band The New Testaments is a jazzy love song.

We laugh at the thought of him showing this music to that younger version of himself. But it is clear if nothing else, he has always been unapologetically himself.

Are you interested in Meliorist news & calls for articles? Fill in your name and email below to subscribe to our newsletter!