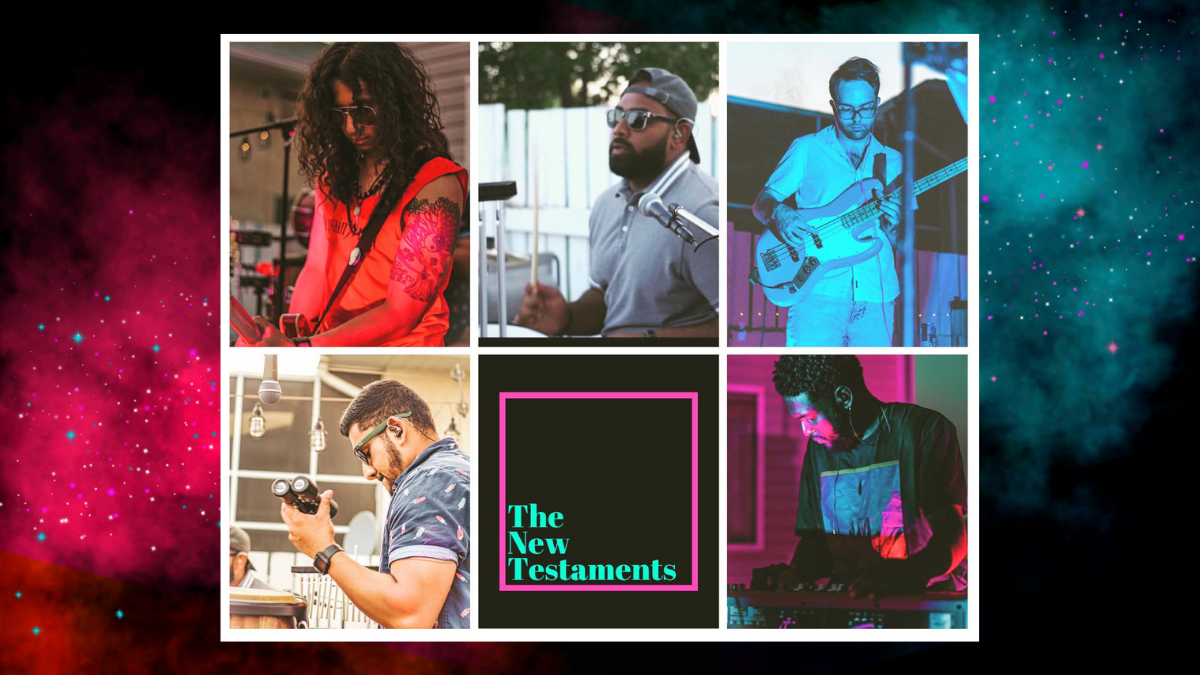 When you think of the Lethbridge music scene R & B, Gospel, and Soul may not be the first genres that come to mind, but local instrumental band The New Testaments are looking to change that.

The New Testaments are an instrumental band made up of five members Joel, David, Matt, Senura, and Leonard. The band’s name is a nod to the place where many of its members got their first taste of music, the church.

When Joel moved to Lethbridge from the Middle East, he struggled to find a platform that would allow him to make the kind of music he enjoyed. It was his search for musically like-minded individuals that sowed the seeds for what would eventually grow into The New Testaments.

The percussionist and media director Senura is his best friend, he met the bass player Matt while at university, and the keyboardist David Aloysius when they played in the same worship team at church.

“We were feeding off each other’s energy and then we talked later and were like yeah we should do this more often” said David. Jam sessions turned into gigs, with the first notable one being a London Drugs Christmas party all while without an official name.

As a newcomer to the scene they were able to quickly win over audiences by putting their own spin on songs by artists like SZA or Dr. Dre. These covers were familiar enough for audiences to connect to quickly but still unique enough to sound fresh.

“We would play [songs] and switch the beat up. We would switch it to reggae, or salsa, or afrobeat midway through the song” said David. That kind of versatility stands out. Especially in a Lethbridge music scene heavily dominated by folk music and rock music’s plethora of subgenres.

The band is now lending that versatility to local artists through its Pocket Sessions, a video series of live performances. Think of it as Lethbridge’s answer to NPR’s Tiny Desk Concert.

“The idea behind the Pocket Sessions was to give a platform for local artists who don’t have a band to come collaborate with us and put their music on a platform,” said Joel.

The session was recorded by local company Three Flag Media which is owned by Joel and Senura. Creating shareable video content is also a way for them to grow their brand, especially during the COVID-19 pandemic when they are not able to perform. Senura hopes this is a way they can gain a following and become a go to call band for artists in the Calgary and Lethbridge area or visiting artists who may not have a band.

That does not mean the focus is just on getting the most views by any means necessary. The number one priority is always the musical relationship between the vocalist and the band.

“The first thing we consider is do we have chemistry with this artist? Is this someone we can put our spin on their music and they’re not going to be like no we don’t want this? It’s a 50-50 relationship. We have worked with artists [where] they will entirely take over and we don’t have an opportunity to showcase the band” said Joel.

So far, the sessions have featured rapper Olly X, and singer-songwriters Maky. and AUGHT all showcasing their stuff as the lead vocalist. If the Pocket Sessions were a pizza, The New Testaments are the dough – lending structure and a base – and the vocalists are the toppings. Each interplaying to create their own delightful combination of flavours.

On paper AUGHT’s (real name Ashley Young) jazz influenced; vocal driven style was a seamless fit for the Pocket Sessions musically. She was also familiar to them from their time working with singer Lemba as backing band and backup singer respectively. So as Ashley says they were “already on the same page stylistically.”

The band encouraged Ashley to record some of her own music, something she had been reluctant to do in the past.

“I’ve written for many, many years and had the people around me to get something out in a polished product and all I had to do was ask but I never did” said Ashley. “They pushed me to do it […] I feel grateful more than anything because I finally have a piece of work that currently reflects me as an artist instead of teenage YouTube covers.”

That visibility is already paying off for Ashley. “I’m already getting offers on projects just from having it out there” she said.

The New Testaments will be hoping the same can be true for them. In the meantime, they’ll keep working on sessions and there are murmurs of an instrumental album in the works. While their work is undoubtedly fueled by a love of music, they know they have the skills to reach their goal of being “ the number one band in Lethbridge.”