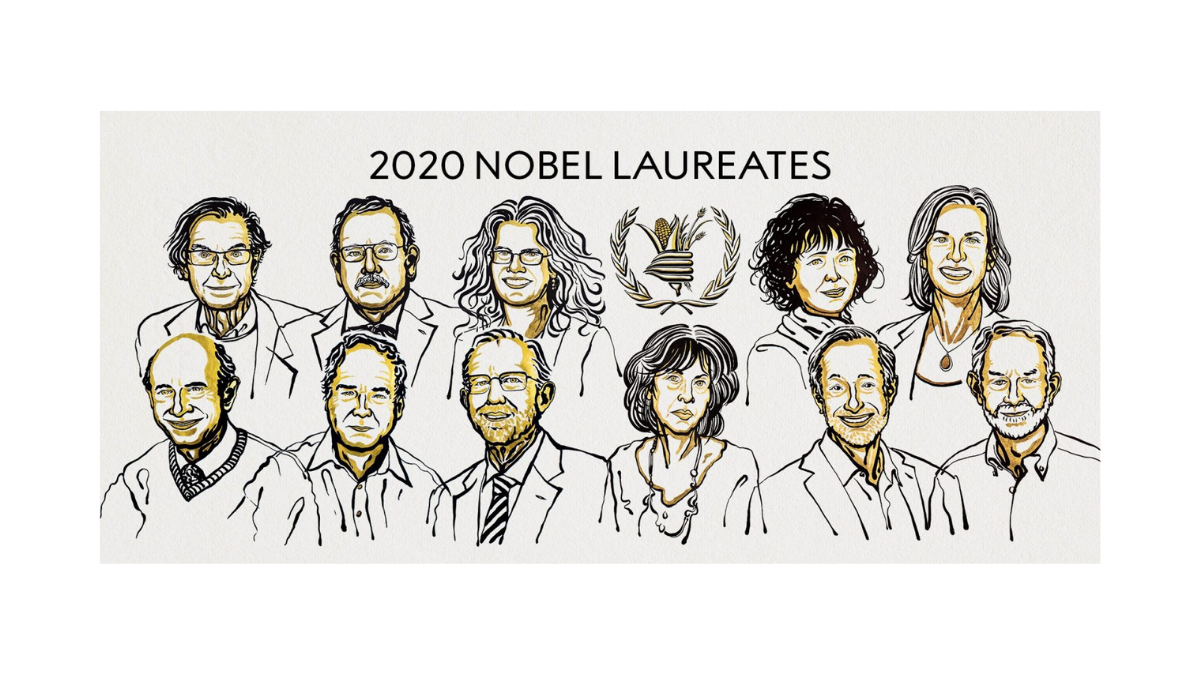 This article was written by freelance contributor Joshua King.

The Nobel prizes for 2020 were handed out this October and they were exhilarating. Ranging from blackhole predictions in the sixties to genetic engineering breakthroughs a mere eight years ago. Since 1895, Nobel prizes are given out each year for the biggest breakthroughs in physics, chemistry, medicine, literature, and peace. In addition, since 1968 a prize in economics has been awarded in memory of Alfred Nobel due to the donations of Sweden’s central bank but is not technically a Nobel prize. Here, I’ll give you the breakdown of this year’s six most esteemed prizes.

The prize this year centers around the discovery of black holes; the oddities of nature where time and space themselves break down. Half of the prize was given to Roger Penrose for his theoretical work in 1965 showing that Albert Einstein’s general theory of relativity predicted the existence of black holes. The other half of the award was split by Reinhard Genzel and Andrea Ghez. They both led labs starting in the early 1990s who discovered the supermassive black hole at the center of our own Milky Way. The prize this year is reminiscent of the 2017 prize that was given out for the detection of gravitational waves, which are often used for detecting blackholes.

Auctions have a long history going back to ancient Rome. This year the economics prize was awarded to Paul R. Milgrom and Robert B. Wilson for their work creating the perfect auction. They used game theory to create an auction for items that were poorly suited for auctioning. They created a new format for the selling of radio frequencies to private industries. More recently their format is being used in Europe to bid on emission allowances as a part of their strategy to mitigate climate change.

Hunger is a problem that has plagued our world for as long as humanity has been around. This year the peace prize went to an organization rather than an individual that is making strides to render  hunger a thing of the past. The World Food Program (WFP) is affiliated with the United Nations and is working to actualize their sustainable development goal to end world hunger. The WFP is working to destroy hunger and famine as a weapon of war and create peace in the world.

Louise Glück won this year’s literature prize. She has published books in multiple languages and concentrates on themes of childhood and family with a focus on the illusion of the self. Many of her poems focus on radical change and rebirth. Here is the poem by Louise Glück that the Nobel committee picked for her bibliography, titled Snowdrops:

“I did not expect to survive,

earth suppressing me. I didn’t expect

to waken again, to feel

in damp earth my body

after so long how to open again

in the cold light

afraid, yes, but among you again

in the raw wind of the new world.”

Jennifer A. Doudna and Emmanuelle Charpentier shattered a glass ceiling this year; they are the first pair of women to win a Nobel. On top of this ground-breaking achievement the award was for a discovery made only 8 years ago. The short-time to wait for a Nobel prize makes this even more impressive. The award was for an acronym chemists have all heard of by now, the CRISPR-Cas system. This is a molecular tool that allows for easy genetic engineering and is used extensively in laboratories, which makes future research faster. This new technology has already led to the creation of designer babies in 2018 by infamous scientist He Jiankui. On a brighter note, the CRISPR-Cas system has picked up applications in agriculture and is in clinical trials to cure a number of genetic diseases.

Imagine a time where people are dying of a mysterious virus. Sound familiar? Except in this scenario it’s the 1970s and those receiving blood transfusions are dying of liver failure and cancers from an unknown agent. Like today, scientists began to characterize this virus which came to be known as Hepatitis C. The work of Harvey J. Alter, Michael Houghton, and Charles M. Rice allowed testing for the disease to become available and antivirals to be produced.

The prize being awarded to scientists who fought off an RNA-virus plaguing our society brings hope that the COVID-19 pandemic can be dealt with. However, Hepatitis C remains a health threat to much of the planet due to inequalities in the availability of treatment and testing. When fighting this new virus plaguing us today, we must also learn from the failures of our past battle.

The theme this year of rebuilding and rebirth shown through Louis Glück’s literature is a beacon of optimism coming out of a pandemic. This also relates to the increasing anxiety around overhauling our systems of energy production to deal with climate change, which Milgrom and Wilson’s economic theories help to deal with.  Finally, we have a prize in chemistry that reminds us of the amazing breakthroughs made this decade, and a prize in medicine reminding us of the last RNA-virus we beat. Overall, the Nobel prizes this year have been a beacon of positivity and hope that we can progress beyond our current pandemic, by reminding us just how far we have come.