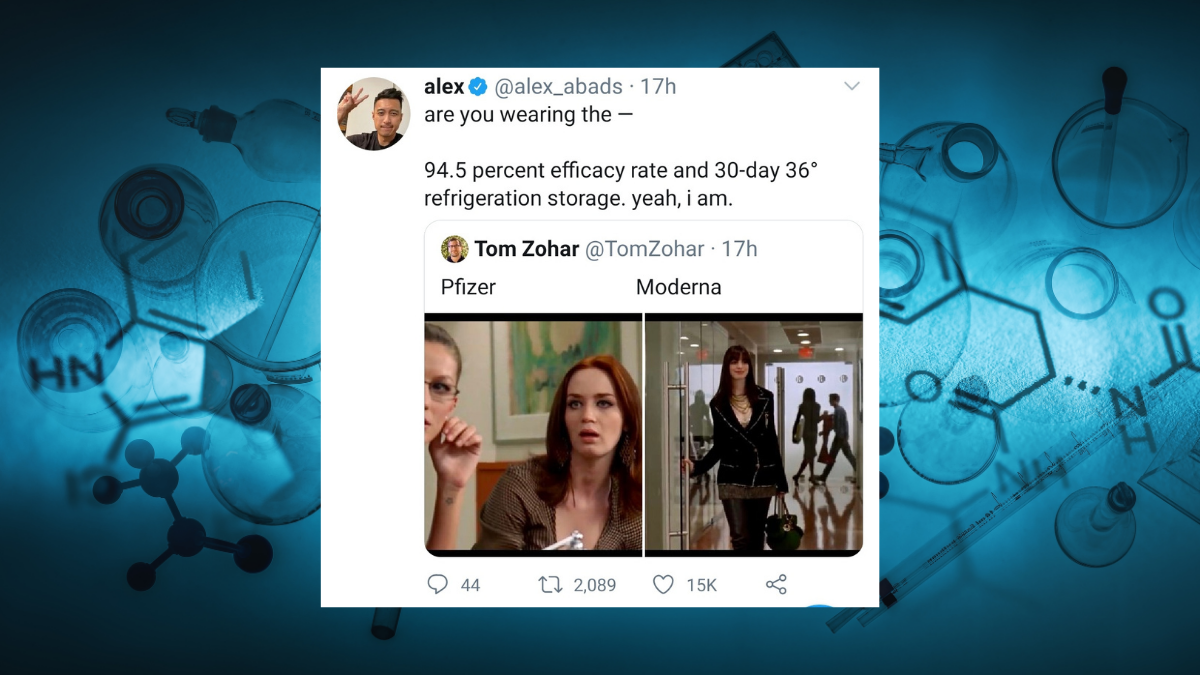 Update – November 20th, 2020: Pfizer has announced this morning that they are submitting their vaccine to the United States’ FDA for Emergency Use Authorization

In the midst of a pandemic, academics, industry giants, snake oil salesmen and the like have been racing to be the first to develop a vaccine for the Covid-19 virus.

Unlike medicines used for treatment of a disease after exposure, vaccines are used as a preventative measure. At its core, a vaccine triggers your immune system to produce the correct kind of antibodies, granting your body the means to fight off the disease before you even catch it. This allows health officials to be proactive in immunizing our population rather than reactive in treating those who contract Covid-19 and develop symptoms.

Earlier in November, the pharmaceutical leader Pfizer Inc. announced incredibly favorable preliminary results for their Covid-19 vaccine candidate. A week after, Moderna Inc., a perhaps lesser known company founded in 2010, announced results comparable to Pfizer with noticeable advantages that may give the global drug giant a run for their money.

For those curious about the potential way out of our quarantine prisons (who isn’t?) here’s how the two front-runners compare (As of Nov 18th, 2020).

1. According to their respective press releases, both vaccines display a >90% efficacy in preventing Covid-19, with sample sizes of greater than 30,000 individuals. Most government regulations have specified only a >50% effectivity, and many health officials are in shock at how well the vaccines are performing.

2. Both companies are still in the process of accumulating short-term safety data in order to apply for Emergency Use Authorization with the United States’ FDA. Moderna has publicly stated that few, short lived side effects are associated with their vaccine. Seemingly as a rebuttal, Pfizer followed up a few days later with a now increased efficacy rate of 95%, as well as plans to submit to the FDA before the end of November.

3. Pfizer’s vaccine requires storage and transport at -70 oC, significantly below US standards, while Moderna’s can remain stable at only -20 oC. Both remain viable in a conventional fridge for short term storage immediately before use, but Pfizer’s vaccine has a shelf life of only 5-6 days compared to Moderna’s month long stability.

4. Both will require two injections spaced around a month apart for maximum efficacy.

5. Both rely on new messenger RNA (mRNA) technology that has never been used for large scale vaccinations. Despite the novel approach, mRNA is generally regarded as very safe by the scientific community and operates in a similar manner to conventional vaccines. Instead of injecting whole pieces of the Covid-19 virus, only fragments of its genetic code in the form of mRNA are injected into the body. The small fragment is all that is necessary for cells to begin making viral proteins (but not the virus itself) triggering the immune system to start making antibodies.

So does this spell out the end of the coronavirus pandemic? The finish line is perhaps a little further than you’d think. Despite best efforts on our government’s part to prepare for production, the world will inevitably see a shortage in the vaccine from the get-go. In the US, officials are talking about immunizations beginning as early as late December (Pfizer has launched pilot delivery programs in Rhode Island, Texas, New Mexico, and Tennessee to ensure proper distribution of their vaccine which requires more strenuous storage conditions) while Canada is anticipating delivery dates in the first trimester of 2021. Back in September, Canada officially committed more than 1 billion dollars to purchase doses of potential vaccines from 5 major companies. Contracts with Pfizer will net at least 20 million doses, while contracts with Moderna will net up to 56 million doses. In total, Canada has secured nearly 414 million doses (nearly 10 doses per-capita) from various drug companies in an effort to “hedge our bets” so to speak.

Apart from supply shortages, there may also be public resistance to accepting the shots. Many have stated that they’d rather take their chances with the virus than try a relatively new vaccine.

What’s important to get out to the public here is that these vaccines aren’t being developed so quickly because trials are being shortened or corners being cut, it’s because companies are taking financial risks and betting on their product, and also the result of the collaboration of scientists all over the world working on the same problem.