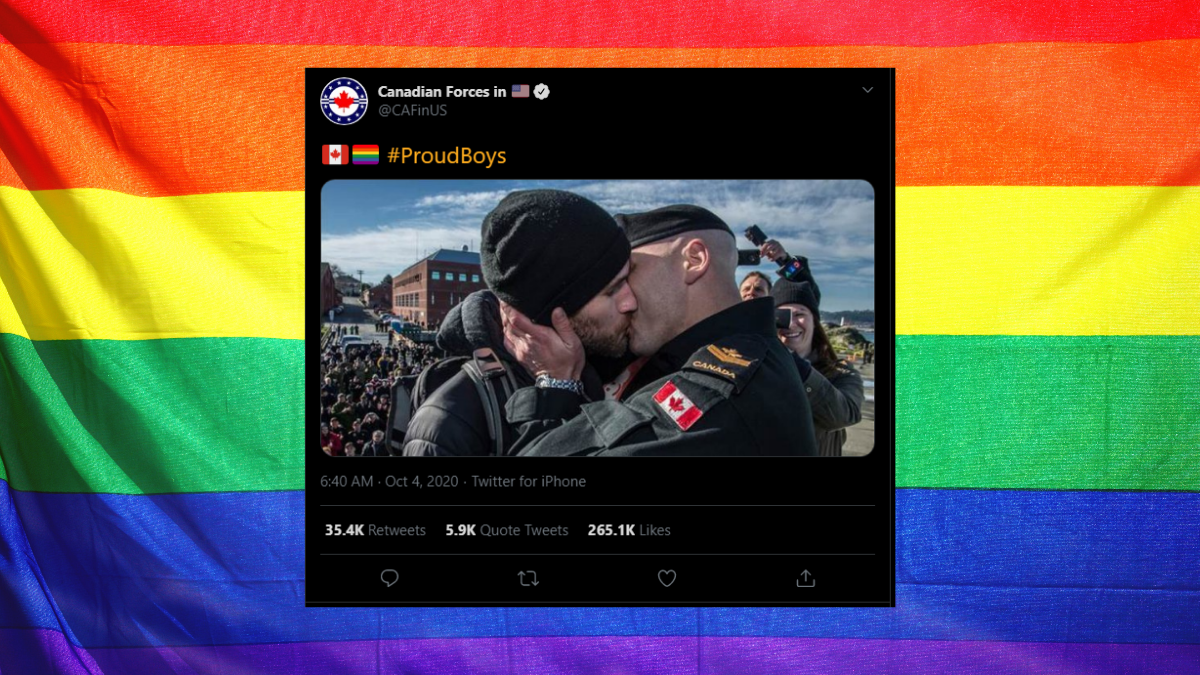 We’ve all been hypocrites at least once or twice in our lives. Usually this looks like chastising your boyfriend for leaving fast food trash in his car when your back seat is a graveyard for many a Crunchwrap Supreme.

But the Canadian Forces are faced with a hypocrisy of a heavier nature.

The Twitter account for the Canadian Forces in the United States (@CAFinUS) tweeted this image on Sunday October 4th of a Canadian serviceman kissing another man with the hashtag #ProudBoys, in ostensible protest of the white supremacist group of that name.

All the while, the Canadian Forces have refused to take white supremacists in their ranks seriously.

The Proud Boys are a group of self-described “western chauvinists” founded by Canadian and VICE Media co-founder Gavin McInnes. McInnes and the Proud Boys have said and done many really terrible things over the years, as the Southern Poverty Law Centre (SPLC) has chronicled. The SPLC has also designated them as a hate group. In short, the Proud Boys are white supremacist, Islamophobic and misogynistic and have distinct fascist sympathies. They are also adamant supporters of US President Donald Trump. They are not good people.

After the first US presidential debate, in which Trump refused to “condemn” the Proud Boys and white supremacy writ large, LGBTQ+ men took to Twitter to drown out the #ProudBoys hashtag with images of themselves and their partners, with the Canadian Forces joining in as well.

A different sort of “proud boy,” if you will.

However, as a queer person and someone who is most definitely against white supremacy, I was less than thrilled to see the Canadian Forces using queer people as a pink smokescreen for their failure to deal with white supremacy in their own ranks.

On July 1st, 2017, a group of Canadian servicemen who were also members of the Proud Boys disrupted a Mi’kmaw ceremony and anti-colonial protest in Halifax. The servicemen involved did not have charges laid upon them and were not demoted, though they did serve a probation period until August 31st of that year. Canadian Army ex-reservist Patrik Mathews is due to stand trial in the United States in January for his activities as a member of white supremacist group, The Base. Soldiers identified as being members of hate groups by the Department of National Defense were given only a warning, and were allowed to stay in uniform.

And those are just recent examples. Remember the disbanding of the Airborne Regiment in the 1990’s following the murder of a Somali teenager? Remember all of the times that the Army and police were called in to intimidate, harass and attack Indigenous land defenders?

The Canadian Forces have introduced a policy to deal with hate in the ranks, but it essentially amounts to internal administrative or disciplinary measures, shielding servicemembers from facing criminal prosecution for their actions. The full policy is not available to the public.

So, we are to see the kissing soldier, feel good about our cool and progressive country and its institutions, and miss how they are implicated in continuing violence.

If the military wants to even begin to take white supremacy, systemic racism and hate groups seriously, they must get rid of the white supremacists within their ranks and ask why exactly it is that white supremacists keep joining up. Until they do that, they should at the very least lay off from using queer people to make them look good.