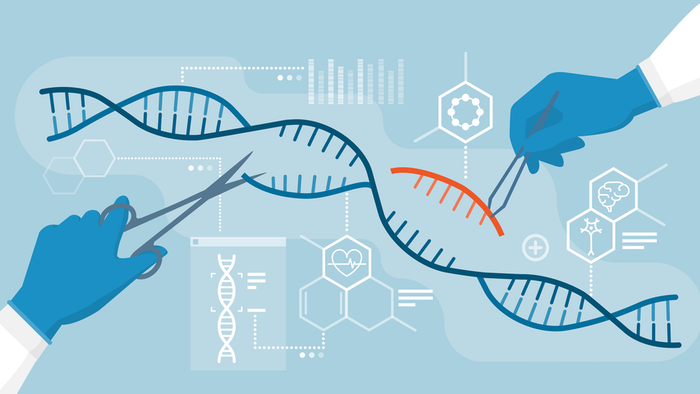 While selective breeding has been employed for millennia to alter the genetic composition of livestock and crops, when people mention GMO foods these days, they’re usually thinking exclusively about direct gene editing. With the 2020 Nobel prize in chemistry going to the two founders of CRISPR technology, Dr. Emmanuelle Charpentier and Dr. Jennifer A. Doudna, gene modification is definitely at the forefront of many people’s interests and concerns.

Once again, the genomes (genetic material) of organisms have been altered by humans for thousands of years through a myriad of strategies including selective breeding and artificial selection; giving rise to modern day food staples like corn and broccoli as well as adorable pets like hamsters and corgis.

Human DNA, which is found in nearly every single cell of our bodies, consists of over 3 billion base pairs that describe a blueprint to our bodies. When cells replicate, the DNA double helix is split open, and are primed for duplication. A special enzyme called DNA polymerase assembles the new strand of DNA by matching the bases on the two strands of separated DNA, effectively creating two new identical copies of the original. Our bodies have many measures to ensure proper replication of these critical molecules, as well as ways to detect and repair damage and errors in replication, a large area of study for biochemists.

While the existence of DNA has been known since the late 1800’s, direct gene modification was not feasible until the 1960’s where an enzyme responsible for the recombining of DNA was discovered (Zimmerman et al, 1967). The complimentary discovery of DNA restriction enzymes which are capable of cleaving DNA into fragments at targeted “restriction sites” around the same time period (Wilcox and Smith, 1970) gave scientists the first available tools for cutting and pasting together different strands of DNA. Following developments in discovering ways to insert recombined DNA into cells, as well as PCR technologies capable of cloning multiple copies of a single DNA fragment led to the advent of modern genetic recombination technologies.

So what is CRISPR and why does it stand out compared to other conventional gene editing techniques? State of the art “pre-CRISPR” consisted of mostly ZFN and TALENs, modular proteins that will identify and interact with a particular “groove” on the DNA strand. Once bonded, a break in the double strand is created leading the cell to activate its own inherent DNA repair machinery. During the repair process, the transcription is altered, resulting in modifications to the genome. CRISPR, or more specifically the CRISPR/Cas9 system, operates in a similar way, but relies on the Cas9 enzyme to target specific DNA sequences. First discovered by Japanese scientists at the Osaka University in 1987, the CRISPR sequences of bacteria DNA were found to be part of their immune system. After being assaulted by foreign viruses, the bacteria’s enzymes would cut up and store sequences of dead virus genetic code in these CRISPR sequences of their own genome. When under assault by a new virus, the bacteria creates specialized attack enzymes, Cas9, which carry around the stored bits of viral genetic code, cleaving any virus DNA that matches their proverbial “mugshot”. In 2011, co-recipient of the 2020 Nobel Prize Dr. Jennifer A. Doudna and coworkers discovered that feeding the Cas9 enzyme artificial nucleic acids, would cause it to seek out any DNA with the same sequence and start cleaving, resulting in a revolutionary new tool for gene editing.

Compared to other conventional tools like ZFN, the CRISPR/Cas9 system is inherently capable of cutting DNA strands, and does not need to be paired with a separate cleaving enzyme. They are also easily customizable requiring only tailor made “guide” RNA sequences (which can be easily cloned) compared to custom ZFN proteins that are quite expensive to manufacture and design. These advancements have revolutionized the field, cutting down both the cost and time required to change the code of life.

Dr. Jennifer A. Doudna (Co-recipient of the 2020 Nobel Prize in Chemistry)

At the most basic level, CRISPR gives scientists the tool to figure out what different segments of DNA are responsible for by knocking out targeted segments and observing changes in an organism’s traits to see what’s affected. Of the 3 billion base pairs in the human genome, only ~1-2% differs from person to person and much of its function is still unknown.

At the more controversial end of things, CRISPR/Cas9 give scientists an extremely efficient way of editing the genome of plants and animals. From crops to new age antibiotics, the applications are seemingly endless; but as a wise comic book uncle once said, “with great power comes great responsibility.” While gene modifications have given rise to higher yielding and naturally pest resistant crops, controversy surrounds the intellectual property aspect of these modified seeds. In the 1980’s the US Supreme Court in a contentious vote extended patent law to cover “a live human made organism”, allowing many companies to hold proprietary rights over their man-made seed. Monsanto for example has had many  allegations made against them for predatory practices against farmers. While most of these claims, such as how they manufacture sterile “terminator” seeds, are unsubstantiated, it’s certainly true that their technologies have greatly affected the market and put those unable to afford their products at a vast disadvantage.

Other concerns stem from the concept of “gene drive”, where using CRISPR scientists are able to ensure that there’s a nearly 100 percent chance that a particular gene in an organism is passed on to its offspring. Circumventing natural gene flow, this theoretically gives us the power to permanently alter an entire species by ensuring an altered gene is propagated indefinitely.

As scary as that sounds, real life applications to this could ensure a future without devastating genetic diseases such as Huntington’s and Alzheimer’s. Therapeutic treatments that target the specific mutated sequence of cancer cells may also be developed using the CRISPR sequence.

In the end its up to society as a whole to decide where to draw the line, and grapple with all the ethical implications at play. Many changes possible today might be difficult to reverse and the juvenile nature of CRISPR’s technology leave many questions still to be answered.