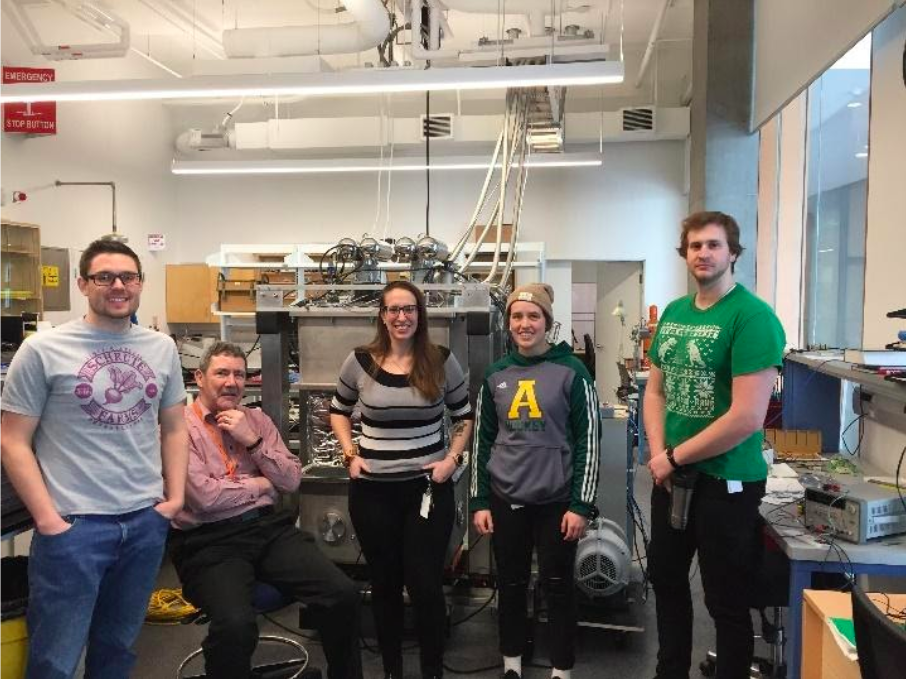 Where’s the coldest spot in Canada? I asked some friends recently and was told Winnipeg. Actually, the answer is an impressive fridge on the 9th floor of the Science Commons. Dr. Naylor’s lab can cool a 75 L volume down to 4 K and a 2L volume down to 0.3 K or -272.85oC, a little colder than Winnipeg, and remarkably 10 times colder than the coldest part of the universe, which is ~ 3 K.

One might be wondering at this point why anyone would need something this cold? Well, when one is headed into space, they need to be prepared. The Naylor lab works in the field of astrophysics and works closely with the Canadian Space Agency, which often requires that equipment sent to space be tested at extremely low temperatures. For example, the Canadian government has made a commitment to go to the moon on the lunar gateway mission and since the lunar night is equal to 14 earth days temperatures can reach a chilly 25 K (-248.15oC).

However, cryogenics is only a small part of the Naylor lab’s research. A big project they are currently working on is the Space Infrared Telescope for Cosmology and Astrophysics (SPICA), that is done in collaboration with the European Space Agency (ESA) and the Japanese Space Agency. An infrared telescope has several advantages over a telescope that operates at visible wavelengths. For example, it allows astronomers to see into dust clouds and get a look at how stars are forming within. Dr. Naylor previously worked on another infrared telescope, ESA’s Herschel Space Observatory that had a relatively warm telescope (~85 K). With its 2.5m telescope cooled to 6 K, SPICA will be between 100x-1000x more sensitive than its pioneering predecessor, allowing astronomers humans to explore a volume of the universe 1000x-10,000x greater. SPICA will be deployed at the second Lagrangian (L2). Lagrangian points are unique points in space around which satellites have stable orbits. This is super useful in space, because if we put something there it won’t float away on us.

Although, the mission is not a guarantee. The SPICA mission is currently vying for funding in the European Space Agency’s M5 competition against two other missions, the EnVision spacecraft and the THESEUS telescope. This competition is the astrophysicist version of a battle to the death. 53 projects began the competition, now it’s down to three, and only one project goes to space. The other two contenders are no featherweights themselves. The EnVision spacecraft would provide new understanding of Venus’ geology. THESEUS would detect gamma-ray bursts from the early universe to learn more about the life of early stars.

SPICA punches back though with its potential to teach us about: star formations, planetary system formations, and the evolution of galaxies over cosmic time. This is enabled by observing infrared wavelengths with state-of-the-art detectors whose sensitivity is approaching the quantum limit; that allowed by the laws of physics.

The M5 competition is no sprint, for Dr. Naylor, it’s been a marathon. His work on the project started back in 2008. 12 years and dozens of students later they are nearing the end. The winner will be chosen in about one year and is scheduled to finally launch in 2032. SPICA is expected to remain of use to astronomers for at least five years. The long time span of the mission will provide opportunities for upcoming physics students for years to come and even passionate undergrads just starting their academic career could end up working on SPICA or other ground-breaking missions.