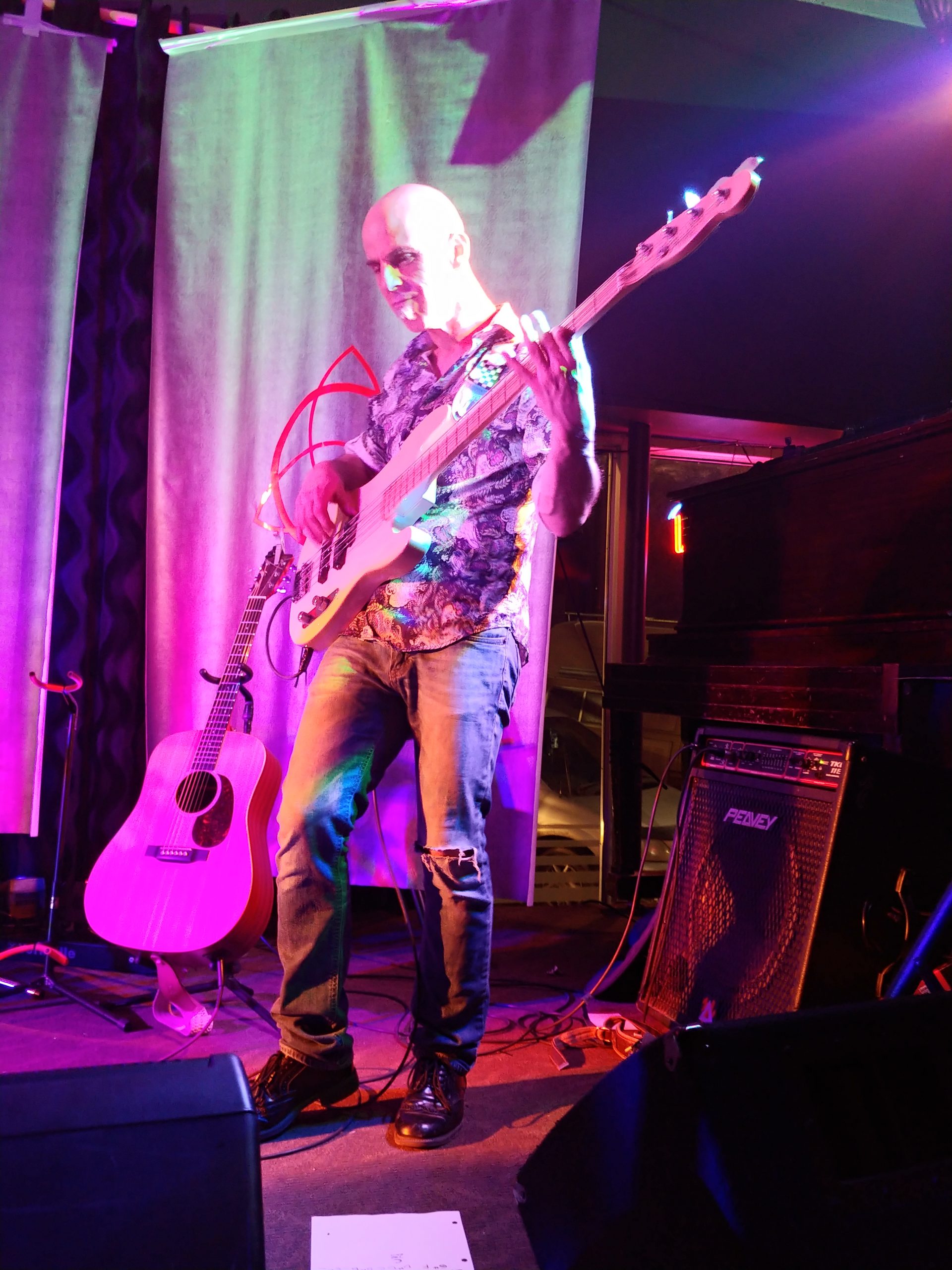 The Lethbridge music scene is a vibrant, plentiful landscape. On almost any day, there are several venues where music lovers can go and hear a wide range of players. Local bars and restaurants have been huge supporters of the community, hosting everything from twangy country to punk and doom. The musicians that call Lethbridge home say that the community is very supportive of each other, and given the small size of our city, very inter-connected. It can be easy to live and breathe nothing but school during the semester, but I encourage anyone with some spare time to check out the local music scene at least once. Nothing is quite like going to see some fantastic people get up and do what they are passionate about, plus you might discover a new genre or a new sound that really moves your soul. I have had the privilege to talk to a few musicians since the semester started, one of which is showcased here. Ian Morrice is a lifelong musician who has been living and playing in Lethbridge for a few years.

In the coming months you will be able to read about different local artists, so make sure you pick up a copy in March and April or check out The Meliorist online!

So I heard a couple of years ago that our music scene was dying, is there any merit to this?

I have only been here for three years, but what I have found is that there are places to play here. Every night, if you want to play. I think there are open mics, there’s always a place to go. I love going to the Owl and the Slice. Those are the places that I usually end up playing with whomever, unless we are going out of town. Yeah, it’s a good scene, and there’s a lot of talent here.

You play with a bunch of different people; do you have any set band that you are involved in?

I’ve got two set bands. I play with The Decadent Phase and I play with the Mark Hall Band. I got called in to play with another band called Coulee Raptors once in a while. Very different in that, the Mark Hall band we have a drummer that’s 61. I am definitely the old guy in The Decadent Phase, but they are a lot of fun. They aren’t jaded yet, so it reminds me of when I started. Then I like to try and mix the two, add different people and different singers. I love working with Bridgette Yarwood. I have been listening to Bridgette’s vocals for a little over ten years now. I only met her two years ago, she was somebody that I discovered with a band on iTunes and I’ve just been a fan of the music forever and now it’s just like, “hey, look over there, I’m playing with Bridgette right now. This is kind of cool.” Yeah, very surreal.

I feel really fortunate to be hooked up with a lot of different people here. Because I look at it like, eh, if we are going to do something special; it’s like everybody has their day job or a regular bad. But would you like to be Ozzy for a night. Would you like to be Jimmy Page for a night? That’s all definitely part and parcel but anybody can get up and play an hour and a half of Zeppelin tunes but it’s way more fun to be Zeppelin for an hour and a half. It’s way more fun.

What do you play exactly?

I play bass, I do some vocals, and I play acoustic if need be.

Where did your music career start? How did it start?

My parents. My dad sang in church, my mom was a piano teacher. So, I started playing piano at a very young age. REALLY wish I had kept it up. There was always music in the house, usually Scottish music. Lots of bagpipes and stuff like that. There was always music going on. I remember at a young age I started buying albums at garage sales when we lived in Thunder Bay. I would bring home everything from 101 Strings to Simon and Garfunkel. I would have no idea what I was buying, I was just this little kid buying vinyl and getting home and figuring out what I bought. I mean it was AM radio back then for me, or at least at home. I didn’t hear a lot of Simon and Garfunkel when I was 8. I was really fortunate that some of the first things I did pick up were those core, key albums like 101 Strings. They tended to be more about the composition and less about soloing and more about the project, the song, for the music. Now I reflect on the music that I really enjoy and it’s progressive stuff that’s more about the whole rather than somebody sitting and doing a solo for five minutes. I mean, that’s great, but I tend to lean towards bands like Genesis and Dream Theater and things like that.

Would those be some of your influences, then?

A lot of my influences came from just playing on the road with different musicians. You start throwing different people together and a couple of times I was thrown in with people I had just met and “hey, you like this music, have you ever heard this?” A lot of the music sharing is just in getting people to pick up things. Moshing different musicians together because nobody has time to go on the internet and listen to every single recording, but there’s got to be jewels in there you’ve never heard. Which is cool because me at 53, there’s still music out there I need to discover. Anything musical for me, I’ve played in rock bands, I’ve played in country bands and a lot of these tribute things.

It seems like a very hippy way to go about things. Meeting other musicians here and there, on the road.

It is very much. I noticed the other day at the bar, you see people meeting on the street and getting together. I find musicians hug no matter what. It’s like I’ll play with someone and say, “hey good night,  thanks a lot,” I put my hand out and they *hug*. We’re different!

Do you write any original songs?

I’ve written a couple, but I don’t really play them all that much. The Decadent Phase though, they have got about 8 of them. There’s five or six that we do in rotation. It’s James doing a lot of the writing, along with Tyler. The two of them together are amazing, they come up with this stuff. They kind of just found me at the Slice one night and I got up on stage with them and that was kind of the beginning of it. They started saying, “you know, we got all of these originals,” so I thought, well, I’ll see where this goes. They are actually really good. Catchy stuff.

What are you favourite/least favourite parts?

I guess my favourite part is just that there are so many places to play. So many really talented people that I run into and end up on stage with. Just the abundance of being able to go out any time you want and play. Least favourite, I’ve noticed in the last couple of years, there’s no money left in it. But in a way, you can look at it and say, “there’s no money in it so let’s just have fun.” I find at a good paying gig I’ll show up and it’s very professional. There are certain expectations. If it’s a charity gig or an open mic you can get up and be way more creative. If you’re getting paid, there’s a product to deliver. You have to love what you do and go out and do it. I wish there was a little more money in it, but that goes up and down too. Playing with people that you enjoy takes a bit of the sting out of it.

If you could play with any musician who would it be?

Collin Hay. I like his writing, it’s weird. It’s just very different. Mostly acoustic stuff. When I do my solo thing with the acoustic, I do a lot of Collin Hay stuff. Another guy I really like is Danny Michel. Canadian guy. It would be really cool to pick their brains on a lot of stuff.