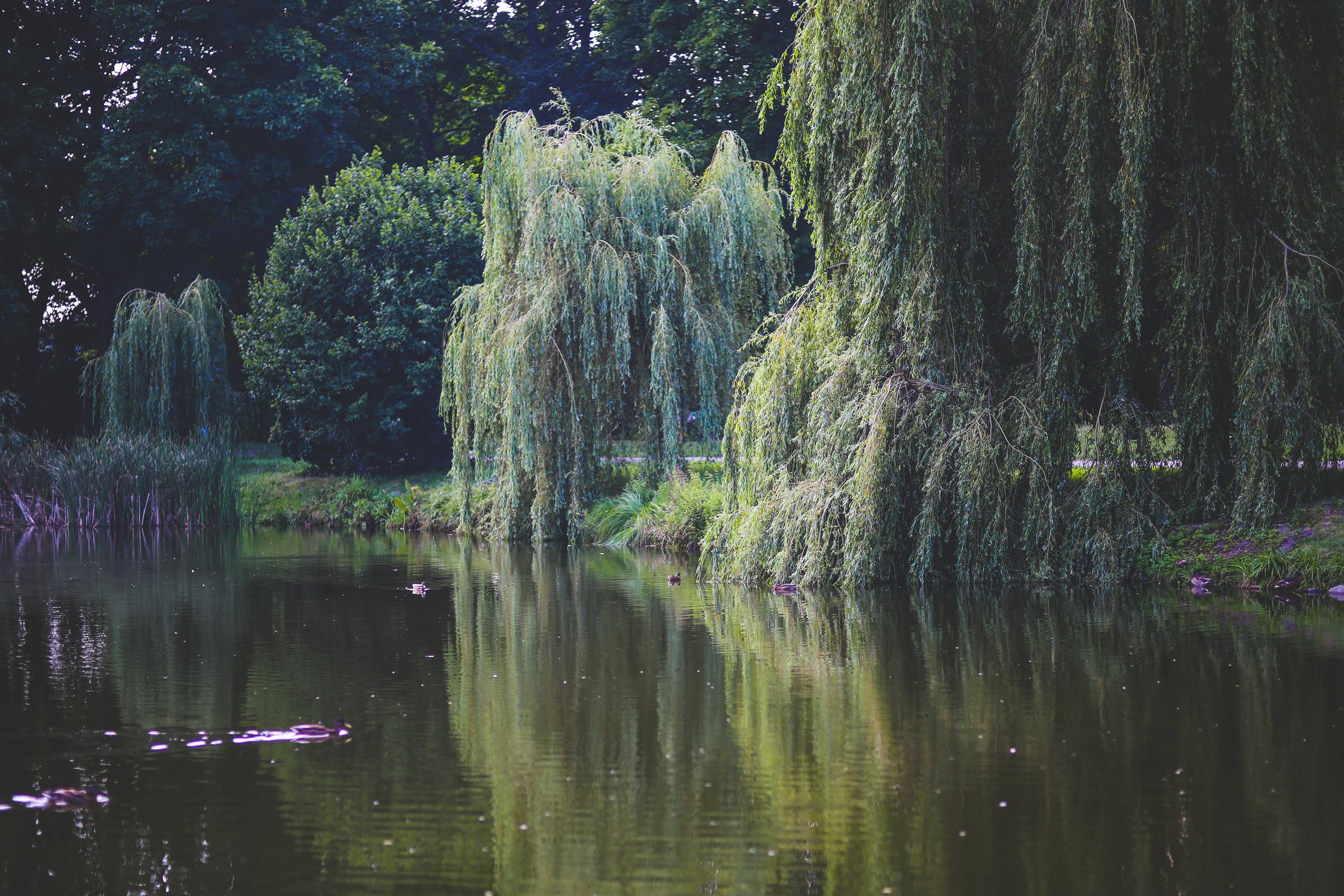 This article was written by freelance contributor Cailin Blanchard

It is to be assured that as you walk through any park in Lethbridge, or even as you drive through many of its neighbourhoods, that you will spot at least a few Willow trees or shrubs. There are many different species in the area, as Salix is a diverse and complex genus. In fact, there are around 300 to 400 species which occur worldwide, mostly in the Northern Hemisphere. There are about 54 native species known in Canada, with only about 7 or 8 of these species reaching tree size – they are most often shrubs. Flowers and fruits are borne as catkins, which are cylindrical flower clusters that, in this case, are pollinated by bees and provide them with an early feast in the Spring. The leaves of Willow are usually narrow. This plant is an indicator of healthy riparian communities.

The therapeutic actions of Willow can be analgesic, anti-inflammatory, astringent and antipyretic. You may already know that its bark is one of the herbs from which the pharmaceutical product Aspirin was originally made. The inner bark contains a chemical known as salicin or methyl salicylate, which is the precursor to salicylic acid. When willow bark tea or tincture is ingested, salicin is converted to salicylic acid out of the urinary or digestive tract. Therefore, it is an appropriate substitute for Aspirin. With the use of Willow bark, simply chewed, made into a tincture or by making a decoction, it is known to be anti-inflammatory, and helpful for muscular and joint pain, fever and gout. It is also known to be soothing for diarrhea and other digestive issues, as well as for irritation of the urinary tract.

Traditionally, bark tea or strips of bark softened by chewing or boiling were used in washes and poultices on minor burns, insect bites, cuts, scrapes, rashes, ulcers, calluses, and even cancers. The leaves have an astringent quality, hospitable to cuts and wounds as well. Moreover, in order to cure dandruff, leaves and twigs were boiled to make a hair rinse, or the hair rinse was sometimes mixed with wine and used as a shampoo. It has been suggested by various studies that Willow bark is useful for relieving headaches and osteoarthritis. There has been strong evidence to demonstrate its helpfulness with lower back pain. Many herbalists recommend it for menstrual cramping, fever, flu, tendonitis, bursitis, and even cancer.

In terms of the energetic qualities of Willow, such as deep medicine for the spirit, it is one which can assist us in the process of emancipation and flow. One very common point is that Willows love to grow by water, and often their shape and form echoes the movement and energy of water in their elegance and grace. Because they enjoy water, many discuss their affinity for rekindling pent up emotions and grief, allowing a release of this. The flower essence is known to help us to find flexible strength, used for stiffness and rigidness in the body and mind. It can help one let go, accept, forgive and adapt, address feelings of resentment or victimization. It supports the feminine, or yin; nature. You could take the flower essence to connect with its energy in this way, or you could simply go and sit with it and see what happens. I’m sure there have been many times you’ve gone to rest under the maternal and soothing shelter of a willow.

As a food, the young shoots and leaves can be eaten raw, though rather bitter, or can be cooked as an emergency food that is rich in Vitamin C. The inner bark can be prepared in the same way, however it is thought to be more palatable if dried and ground into flour. In the Arctic, half-digested willow twigs from the stomachs of slaughtered caribou were considered a delicacy.

Historically noted, the Blackfoot people have used this plant for many things, such as an infusion of the root for venereal disease, bruises, throat constriction, internal bleeding, bloodshot eyes, and it was mixed with kidney fat for head sores. The root was chewed and spat into horses eyes if they were bloodshot or cloudy. Roots were also dried, crushed, then soaked in water and grease as a dandruff tonic.

In Ancient Rome, ash from Willow leaves or twigs was believed to remove corns, calluses and facial blemishes, and mashed leaves were taken with drink to check lustful behaviour (while overdoses could cause impotence). The first recorded use of salicylates dates back about 4,000 years to the Sumerians, who noted the pain remedies of the willow tree on early clay tablets. Ancient civilizations of Mesopotamia used the extract to treat fever, pain and inflammation. Both Chinese and Greek civilizations used Willow for medical uses more than 2,000 years ago. There is a huge history of this plant as an herbal pharmaceutical, dating back to 1763 when one of the first clinical studies on Willow bark was conducted at the Reverend Edward Stone of the Royal Society of London.

All that has taken place from that moment onward, including the involvement of massive German chemical companies such as Bayer, has contributed to Aspirin becoming one of the most widely used drugs in the world. One important note to make in this regard is that there are some differences between natural willow bark and the drug Aspirin. Aspirin has an antithrombotic action (blood-thinning effect) which willow bark does not have. Also, side effects that occur with the drug, such as stomach ulcers and mucosal damage do not take place in the body with willow.

Here on Blackfoot Territory, we must acknowledge that people who have lived here since time immemorial have long developed a relationship with this tree. While so much has changed, it is our responsibility while living on this land to respect it and begin to develop a relationship with it. When you go to harvest this beautiful and healing medicine, please do so with respect and come with an offering – whether it be strands of your hair, tobacco, flowers, or whatever feels right to you. It is not so much the value of the gift as your intention of gratitude for the bounty of mother nature, in everything that she grows and is offered to us. It is also reverence for the people who’ve walked this land for an immeasurable time and acknowledging their inherent evolution with it.

May the Willow be with you…