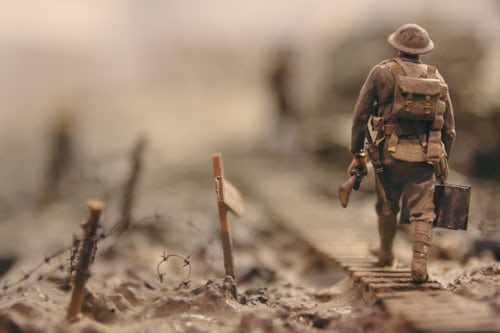 In a letter dated June 19, 1918, A. Desnomie, an Indigenous soldier wrote: “…as we all say here, we never retire but recoil.” His writings reflect a sense of pride in fighting for England and Canada. Speaking about the other Indigenous soldiers with him, Desnomie notes that they were “all well and ready to get after the Fritz again.” Indigenous soldiers participated in the Great War in comparable numbers to Anglo-European Canadians. At first, Indigenous peoples were turned away at the recruitment offices. Only once the Canadian government realized that the war would need additional manpower did they consider allowing non-Anglo-European applicants. Until enfranchisement, the Indian Act considered Indigenous people to be wards of the state, making them ineligible for mandatory military service. William Graham, Indian Agent for File Hills during the war years, wrote memoirs that detail his experiences with the recruiting of Indigenous soldiers in the prairie provinces. Routinely throughout his discussions, Graham notes his surprise and admiration for the Indigenous people who went to fight even when “They could easily have remained at home and been an expense to the Government…and those who remained at home gave very generously.” Indigenous men and women on the home front donated notable sums of money to the Patriotic Fund, joined Red Cross Societies, knitted socks and wrapped bandages comparable to Anglo-European Canadians. I argue that during the war years, Indigenous soldiers had the same experiences as white, European Canadians. The post-war years, however, presented Indigenous people with several challenges as the Canadian government attempted to reinforce pre-war social conditions.

Pre-war social attitudes were defined by the legal status of Indigenous people as wards of the state, separated from mainstream society. Indigenous men could not vote or leave the reserve without permission from their Indian Agents. The Canadian government was focused on the assimilation of Indigenous people into Anglo-European culture. This sentiment is expressed aptly by Duncan Campbell Scott, the deputy superintendent of the Department of Indian Affairs:

“These men who have been broadened by contact with the outside world and its affairs, who have mingled with the men of other races, and who have witnessed the many wonders and advantages of civilization, will not be content to return to their old Indian mode of life…in other words, the Indian shall become one with his neighbour in his speech, life and habits, thus conforming to the world-wide tendency towards universal standardization which would appear to be the essential underlying purport of all modern social evolution.”

Scott believed, as did William Graham, that the war would help lift Indigenous men out of their “primitive” ways of life. On the topic of an all Indigenous battalion, Graham wrote in his memoir:

“Personally I looked upon this as a mistake. In the first place, they would do much better if mingled with whites. They would pick up their work more quickly…and could easily fall in line with their white brothers.”

Similarly, General Sir Arthur Currie noted that Indigenous people would achieve “equality with their peers.” Winegard argued that the decision to disperse Indigenous soldiers was assimilationist, considering French and black Canadians were given their own divisions.

Graham proceeded to discuss the “advancements” of Indigenous soldiers after coming home, namely that they read more, entered into outside life, and joined soldier organizations. Graham likely felt that fighting alongside white Anglo-Europeans helped Indigenous soldiers assimilate. This theory seems to have applied exclusively to men.

Recruitment initiatives for Indigenous peoples began only after the Canadian government realized they would need more manpower than they initially thought. Most Canadians believed the war would be over by Christmas, allowing the CPF to be especially selective with recruits. Indigenous people, along with non-Anglo European Canadians were turned away at recruiting stations. Despite conscription later in the war, Indigenous peoples were exempt as a part of the Indian Act. Many bands also had stipulations in their treaty agreements that they could not be forced to fight for the crown, especially in areas with historical French-English divides. Both Indigenous and white Canadians offer similar reasons for going to war, mainly to protect their families, a duty to the crown, a sense of adventure, boredom and economics. In a letter to his son, A. Brass (unknown tribe) wrote that he was fighting so that his son didn’t have to:

“I am here and glad of it; so you have no reason to hang your head down. That’s the reason I came over for one thing. I would not say this, but you are too young, and there are many men, no use you sacrificing your life.”

Differences in culture and race appear to have has little influence on a soldier’s decision to enlist. Notable exceptions are based on Indigenous military traditions and life in the residential school system. Mike Mountain Horse illustrates his reason for enlisting as a way to reconnect with his ancestors and the lost values of the warrior in Blood traditions. Mountain Horse articulated this feeling in his memoir:

“After his first exploit on the warpath, the young warrior was considered a finished product of red manhood, a valorous defender of his people.”

Accounts from Indigenous soldiers clearly points to religion being a driving force behind the decision to enlist. This is also not uncommon among white soldiers. Recruitment posters and propaganda utilized religious imagery to compel Canadians to give to the CEF, with their lives or their wallets. Recruitment officers told men that they should enlist “because God demanded it,” and it was “the Christian thing to do.” The relative lack of documentation regarding religious propaganda may point to how commonplace it was. The Great War was seen as the ultimate fight between good and evil; right and wrong. It would have been easy to relate fighting with Christian values.

The only truly unique reason for enlisting among Indigenous Canadians is escaping residential school life. William Graham recounts a 15-year-old boy, Moses Lavallee who ran away from his reserve and pleaded to be let into the army as a bugler. Graham sent him back, but Lavallee ran away again not long after.

“What happened was this, he left school late at night and made for the bush. Once there he felt comparatively safe, as he knew they would not be likely to search the bluffs for him. He remained there for several days before heading north…finally he reached the town of Yorkton in the province of Saskatchewan. There he enlisted in a battalion leaving for England.”

Lavallee’s story was not a unique one. Three students from the Red Deer Industrial School succeeded in running away and enlisting. Three students from an Alberta school managed to get to England before being returned to their parents. Writer Hugh Dempsey noted that Agency Records list far more than those previously mentioned. Escape from residential schools was not an uncommon occurrence before the war, as pointed out by Graham in his memoir, however, the war may have given students a place to go where it would be more difficult for the Indian Agency to retrieve them. It may have further appealed to Indigenous youth who thought they could engage in their cultures warrior traditions by fighting overseas; something they could not do in school. Missionaries that taught in reserve schools constantly had to talk their students out of enlisting.

The number of students willing to run away, trek through the wilderness and risk getting caught by the RCMP in order to fight in a war points to the deplorable conditions of residential schools in Canada.

The letters compiled by Graham provide a valuable resource when looking at the experiences of Indigenous soldiers overseas. It is important to note, however, that they are limited to the prairie provinces. The contents of the letters consist largely of accounts of injuries and homesickness. Few explicitly discuss battle, focussing on more positive topics. Soldiers talked about missing their country and their homes, much like any other soldier. Abel Watetch’s writing summed up the general sentiment when he wrote:

“I am sorry I could not tell you of some of my experiences in this war but one thing, I have seen what I wanted to see and more.”

These writings suggest that the universal horrors of warfare overrode racial and cultural differences among soldiers. The few letters that mentioned issues specific to Indigenous people or reserves focused on their careers after the war, rather than their experiences overseas. Harry Stonechild wrote:

“For all the time I spent in the army, I have not had a crime against me. Isn’t that worth mentioning? And have kept away from drink of any kind, although you might clearly see that I might have it at my request any time…when I see the harvest field around here I feel as if I could be rich soon in that colony.”

Stonechild also inquired about voting rights as a soldier. His writings reflect a pretense to the kind of activism that would occur among Indigenous veterans. They believed they deserved the same compensation for service as their white peers. The Canadian government did not honour the sacrifices and service of Indigenous veterans. Once the war was won, the Canadian government focused on enforcing pre-war social attitudes. Land was continually stolen from reserves to give to white veterans while Indigenous veterans were often denied the same grants. While it can be argued that the Great war did little to change pre-war social attitudes, there is something to be said for the opinions of average Canadians. It is likely that white soldiers opinions of Indigenous people shifted during their time together. This could have led to long-term changes as each generation became more open and tolerant.

Through letters and memoirs it is visible that Indigenous and white Canadians had generally the same experiences during the Great War. Through the recruitment process and overseas service, Canadians experienced a unique phenomenon where the Canadian government was unable to enforce many pre-war social structures. Due to the unexpected demand of manpower and duration, the Canadian government was forced to allow this kind of inter-mixing. White and Indigenous soldiers existed in the same spaces for a number of years, working and living together.