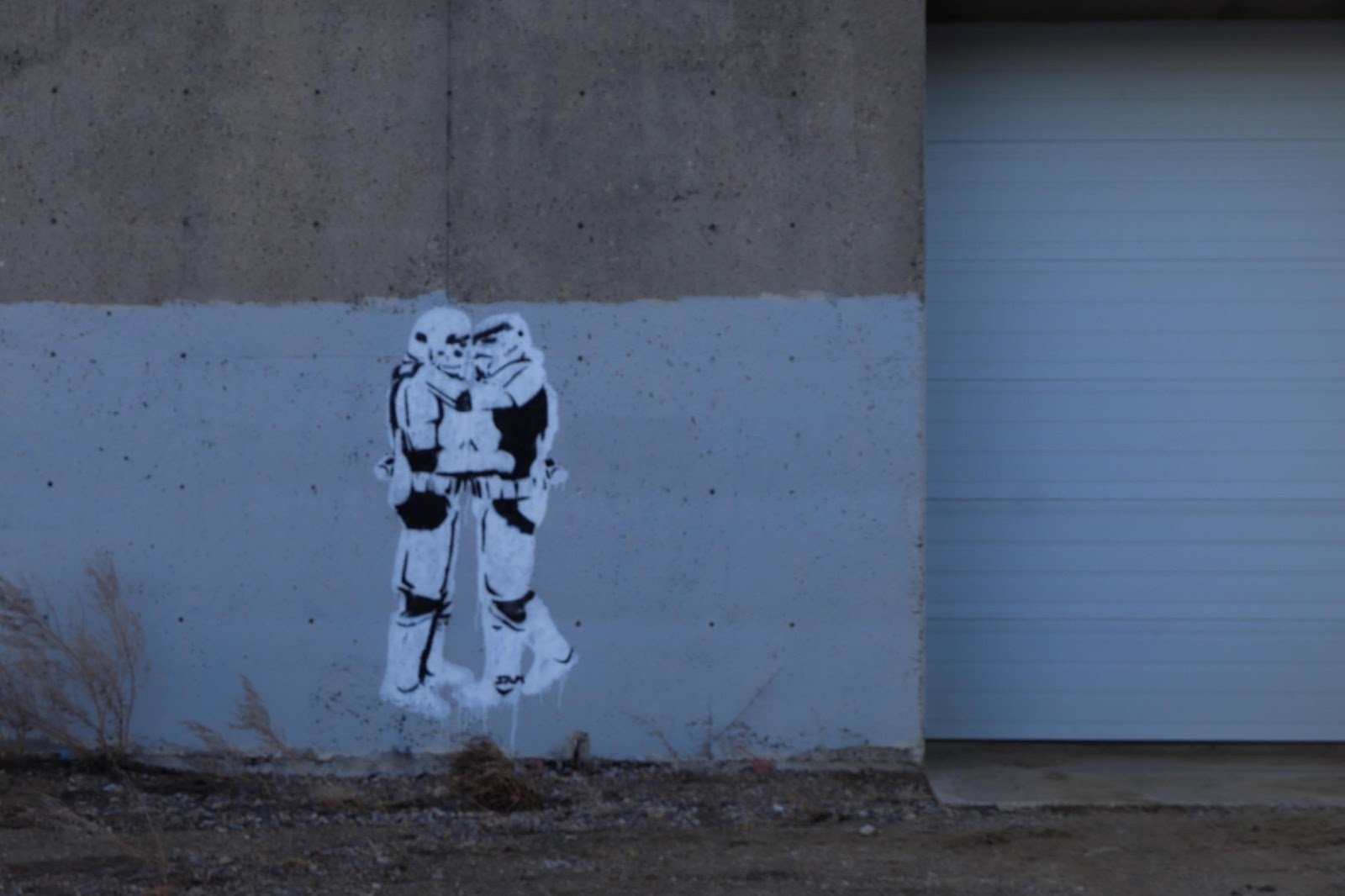 Back in September, I wrote an article for The Meliorist about taking one’s learning out of the classroom and applying it. My focus at the time was mainly on research, but I think I’ve missed an important way knowledge can be applied. Art helps to spread ideas and communicate thoughts and feelings that words can’t get across. Here on campus we have a great deal of community-created art that inspires, communicates, and advocates. Much of this art is not made for class credit or a pay cheque, but it adds to our campus community and culture, which is perhaps more valuable. So, here I’ve explored some of the everyday art at the university that I think may go unnoticed.

Kissing Stormtroopers This can be found hidden away between the science building and the CCBN. This appears to be inspired by Banksy’s kissing cops sketch. What it means is up to the observer, I personally can’t decide on any specific meaning. Who spray painted this is unknown at least to me, but it was done with some expert style.

The Cairn One of the oldest forms of art, a cairn sits meekly on top of a hill near the science building. What this represents and who made it remains a mystery, but it fits the landscape beautifully and welcomes students heading into the coulees from the university campus.

Starship Uleth This can be found in the stairwell of A block in uhall. It is a stylised map of the U of L campus overlaid with labels that make our ordinary campus sound like a spaceship. I’ve included this piece because I think I’ve only ever had a reason to use this stairwell once and I wonder how many people have never seen this. Personally, this excites my childhood imagination where everyday normality is something to look at in wonder.

The Thing (2?) This is located just down in the coulees north of the University. Back in 2015 there were some news reports about something called rust rock cathedral being built in the coulees and also vaguely referred to as the thing. I was unable to figure out if this is actually it or a copy. One thing for certain though is that this monument of trash stares at us from its spot in the coulee daring us to consider the ways we destroy the environment here in our backyard.

Writing on the Wall The science building opened up this fall and many of the walls and glass are open for being written on with dry erase markers. This allows people to leave expressive pieces all over the building, speaking to the creativity science is meant to inspire. One work I thought deserved a highlight is the beautiful drawing outside of the biology department that has since had more great stuff added around it. Another area on the 6th floor has become the impromptu hall for social justice issues. The display that started it off back in September was one supporting the Hong Kong protests and since then many more have popped up. The great thing about the walls on the science building is that you can contribute to the ever-evolving body of art.

The View One under-appreciated art that has been here well before the University showed up is that of nature. From our vantage point on the top of the coulees we have an amazing view of it all, unfortunately one that is easy to get used to and forget. Sometimes it is important to remember that few campuses have a view as nice as ours.

Last spring, when talking about the science building, a professor said to my fellow group of students, “you’ll be the first ones in there, so it will be you who sets the culture of the place for the coming years.” I kept this in mind this fall semester and personally witnessed something that speaks to the power of community.

When the semester started, images and texts were put up on the walls that would inevitably become defaced. I remember one instance in particular, where a panel went up supporting the pro-democracy protests in Hong Kong. The next week someone had written a pro-authoritarian rebuttal on it that seemed to only be meant to be upsetting. However, as the semester went on these sorts of things happened less and less.

Now what I see added to the walls are: geeky physics jokes being put up outside of the physics department, goofy chemistry stories put up outside of the labs, study guides left up on the walls for the struggling freshman, and another pro-democracy panel for the Iranian protests showing up beside Hong Kong. I think in this little microcosm of our campus we’ve seen how art and community can have a positive impact.